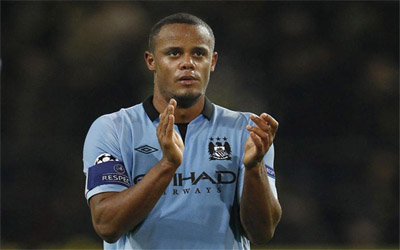 Kompany announced the news to fans via a video message posted on his YouTube channel earlier today.

“I’m honoured to be joining the Warrior team – I actually see our relationship as more of a partnership because it’s about a lot more than just their brilliant product,” he said. “For me, being a warrior is a mindset. Beyond your physical ability, it’s about what you have in your heart, in your head and in your mind. I’m happy to endorse those values.”

“Vincent is built with a kind of sporting DNA that makes him the ultimate warrior and perfect signing for us,” he said. “He is the complete footballer, equipped with incredible skill as a player along with the power to inspire as a captain. He has already begun etching a legendary mark on the modern game and is galvanizing Belgium as an international football force to be reckoned with. Aligning with an athlete of this calibre is a remarkable feat.”

Kompany has developed into one of the biggest names in world football since starting his career, aged 17, with Belgian side Anderlecht. Following a two-year spell with Hamburg SV in the German Bundesliga, he joined Manchester City in 2008, making his Premier League debut with a 3-0 win against West Ham United. Fast approaching his 200th appearance, 26-year-old Kompany is looking to build on the side’s 2012 success by spearheading another Premier League title-winning campaign.