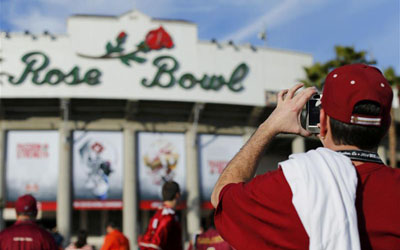 Northwestern Mutual announced today it will become the presenting sponsor of the historic Rose Bowl Game beginning in 2015, as part of an expansive partnership with ESPN.
The deal, which runs through 2020, includes positioning across ESPN’s coverage of 23 college sports championships.

Ed Erhardt, president of ESPN Global Customer Marketing and Sales, added, “The Rose Bowl Game is one of the most celebrated events of the year. We look forward to working with Northwestern Mutual in this, the inaugural year of the College Football Playoff, and beyond.”

As part of the presence with the Rose Bowl Game, Northwestern Mutual will be the sponsor when the bowl hosts the College Football Playoff Semifinal in the inaugural year of 2015, as well as in 2018. Northwestern Mutual will be prominently featured on in-stadium signage including the mid-field logo, tickets and uniform patches. The deal also includes commercial inventory throughout the Rose Bowl Game telecast, as well as each of the other “New Year’s Six” Bowls and College Football National Championship.

Northwestern Mutual became an NCAA Corporate Partner in 2012, and in April announced an arrangement to extend the terms through August 31, 2020. The company’s marquee partnerships portfolio also includes the Men’s and Women’s NCAA Golf Championship on Golf Channel, Forbes and the SEC on CBS.