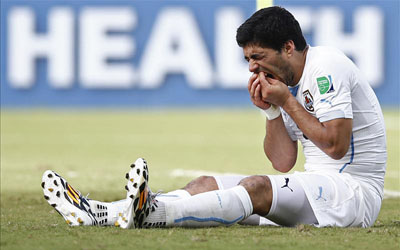 After been served with a four-month ban for biting an Italian player during a World Cup Match, Luis Suarez has been dealt another blow after personal sponsor 888poker terminated its partnership with the Liverpool front man.

The gambling company ended their deal after it was revealed the Uruguayan striker bit Italy defender Giorgio Chiellini which led to FIFA suspending Suarez from all football activity for four months.

The forward has also been fined 100,000 Swiss francs (just under £66,000) and banned from nine internationals.

888poker appointed Suárez as a brand ambassador in May but have confirmed that they are ending their partnership with the player after the incident, which took place in Uruguay’s 1-0 win over Italy on Tuesday.

A statement read: “888poker signed Luis Suárez following a fantastic season for which his achievements were widely recognised.

“Regrettably, following his actions during Uruguay’s World Cup match against Italy on Tuesday, 888poker has decided to terminate its relationship with Luis Suárez with immediate effect.”

Suarez could also be on the brink of losing major sponsor adidas who will have talks with Suarez about their partnership after the World Cup.

“adidas certainly does not condone Luis Suarez’s recent behaviour and we will again be reminding him of the high standards we expect from our players.

“We have no plan to use Suarez for any additional marketing activities during the 2014 FIFA World Cup.

“We will discuss all aspects of our future partnership directly with Suarez and his team following the World Cup.”

Should sponsors end their relationships with Suarez? Have your say in the latest iSportconnect Discussion