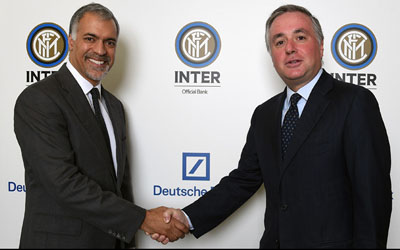 FC Internazionale, cialis also known as Inter Milan, drugs have renewed their partnership with Deutsche Bank for the 2014/15 season.

The bank will again be one of the club’s Top Sponsors and its Official Bank for the second consecutive year.

Inter CEO Michael Bolingbroke commented on the deal: “We are very proud to extend our relationship with Deutsche Bank. The agreement reflects perfectly our strategy of partnering with premium international brands and market leaders, as we are in the football industry.

“This is our second year of partnership and after a first phase focused on establishing a strong brand association, we will now concentrate on an activation program aimed at creating additional value for all Inter fans.”

Flavio Valeri, Chief Country Officer Italy, Deutsche Bank added: “We are delighted to work alongside FC Internazionale again as Top Sponsor and the club’s main bank. Both of us have a long history of excellence and professionalism in our own areas. Working together is a byword for success and bears witness to Deutsche Bank’s commitment to Italy, the Group’s main European market after Germany.”

As Top Sponsor, Deutsche Bank will, among other things, enjoy increased visibility for the bank during matches at the Stadio Meazza.