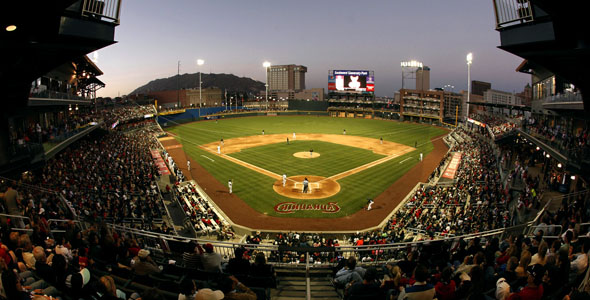 Baseball has long been considered America’s game, and in turn, ballparks are America’s living rooms. Even beyond the Major Leagues, the complex farm system that feeds professional teams and the ballparks in which these Minor League teams play have become opportunities to drive interest and revenue and develop some of the most notable talent in the sport. While this farm system serves as an important training ground for Major League talent, Minor League Baseball is also inherently different than its Major League counterpart. Minor League ballparks are historically family-friendly, inexpensive and much smaller, more intimate experiences, while often located in smaller cities that are without professional baseball teams, providing the community, city and even region in some cases, with a ball club to rally behind and support. My colleague, Mike Sabatini, the designer of the $74 million Southwest University Park, the newest Minor League ballpark, in El Paso, Texas discusses how Minor League Ballparks can build community – and have a lasting impact.

There are only 30 Triple-A teams in the United States and even fewer playing in brand new, state-of-the-art facilities. In the world of the Minor Leagues, investing in a ballpark is an opportunity for teams to breathe new life into their fan base and reconnect with their community – much in the same way professional sports use their facilities as catalysts for growth. The city of El Paso, which sits less than two miles from the Mexican border city of Juarez, and MountainStar Sports Group, the owners of the El Paso Chihuahuas, the Triple-A affiliate of the San Diego Padres, were faced with a unique situation. They didn’t have an existing Minor League team in the city … and getting their ducks in a row to build a downtown stadium was an important component for the city and ownership group to entice and secure a franchise. From the get go, the ballpark design had to do more than just cater to an existing fan base; it had to create a compelling enough experience to build an entirely new fan base from scratch. Furthermore, the ballpark was designed to serve as the centerpiece for the revitalization of downtown El Paso, proving to baseball lovers and skeptics alike that the sport could thrive in this historic border city. All of this had to be accomplished within one of the shortest timelines ever seen in Minor League Baseball for the construction of a new ballpark – just more than 11 months from groundbreaking to opening day.

This appeared to be a hefty task, but one the Populous design team wasn’t afraid to tackle. Within a tight timeline and on the tightest site in Minor League Baseball six acres, Southwest University Park opened on April 28th. The final design has been recognized as “the best in the Pacific Coast League” and as much more than just a ballpark – it is an example of a grander vision for El Paso’s future. Some early steps in our design process played an important role in accomplishing this:

In design, as community-centric as this ballpark is, it is critical to the design to bring together all stakeholders and ask them tough questions. We worked with the city and team and encouraged them to think beyond logistical concerns (i.e. how many seats, how many concessions, premium seating makeup) and instead think about what they saw as the long-term vision for the ballpark and the city. We asked strategic questions – from their aspirations to their concerns – allowing us get to the root of what the ballpark should look like and represent.

In addition to asking the big questions, we wanted our design to capture El Paso. Part of this was made possible through conversations with citizens, while another part of this was exploring, researching and studying the city’s history. Because of the city’s prominent architecture we chose brick similar in the style of El Paso’s Union Depot for the stadium exterior. The city’s art history made public art an important part of the design. Three separate pieces were commissioned by local artists, including a 68 foot tower of stained glass at the entrance that chronicles the city’s history. In addition, we made decisions to use the mural artwork concept in the ballpark, commonly seen in El Paso and Juarez, by opting for concession signage and wayfinding painted directly onto corrugated metal and brick.

We honed in on the characteristics that make the city unique: Its location on the border; the largest bilingual, binational workforce in the Western Hemisphere; the Franklin Mountains, the largest urban park in the nation; and a more than one hundred-year history with baseball. We discussed how our vision for the ballpark and the city’s future should honor these defining characteristics in an impactful way. This was illustrated naturally by the site, which offers views of the Franklin Mountains, downtown El Paso, the Rio Grande and the city of Juarez, just across the border. It was also evident in some of the more technical aspects of the design. The site required us to design a much steeper seating bowl than typically seen in Minor League Baseball. We also kept El Paso’s tight-knit community in mind and designed a variety of seating neighborhoods, from berm seating, to unique overhangs in the outfield, to brick structures in right field. We also wanted the ballpark to be accessible and a true part of the city. One of the ways we accomplished this is by making it possible for individuals outside the stadium to catch glimpses of the game along a fence at the right field entrance.

These components and details, however small or large, resulted in a ballpark solution that is far from formulaic – it’s a ballpark that belongs to El Paso. On opening day and the games thereafter we saw thousands of fans pack the stands, many of whom traveled across the bridge from Juarez to soak in a Chihuahuas game. In the vicinity surrounding the ballpark, drinking and eating establishments were full of fans enhancing the game experience, fulfilling the hope of many El Pasoans who wanted a vibrant downtown. They may not have been fans before, or have ever attended a baseball game before the Chihuahuas came to town, but the new ballpark has brought with it a sense of pride and of community that crosses all borders.

Mike is a licensed architect with more than 20 years of professional experience. Mike served as senior project designer for the Citi Field ballpark project, home to the New York Mets. During his professional tenure prior to joining Populous, he provided design services for a number of facilities.