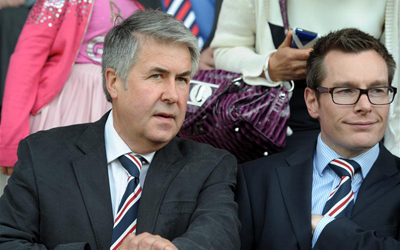 Rangers have announced numerous chances in the boardroom at Ibrox, prostate with non-executive directors Malcolm Murray and Phil Cartmell heading for the exits and James Easdale coming in.

Murray (pictured left) was appointed chairman at the Glasgow club when Charles Green’s consortium purchased the club’s assets for £5.5m in 2012.

He finally stepped away from his chairman role in May, having survived a number of attempts to oust him and was replaced by Walter Smith who joined as non-executive chairman.

Easdale, 42, is a Greenock businessman and will be appointed as a non-executive director.

“As a lifelong Rangers supporter, I am proud and honoured to serve on the board of such a great sporting institution,” said Easdale.

“And I look forward to helping Rangers Football Club continue its journey back to the top of Scottish football.”