On 19th November 2019, Ajit Pai, chairman of the United States Federal Communications Commission (FCC), announced a public auction of the C-band spectrum (about 500 MHz of bandwidth between 3.7 to 4.2 GHz) to facilitate the development of 5G. The C-Band, a swathe of satellite spectrum that has been historically used for fixed wireless services, […] 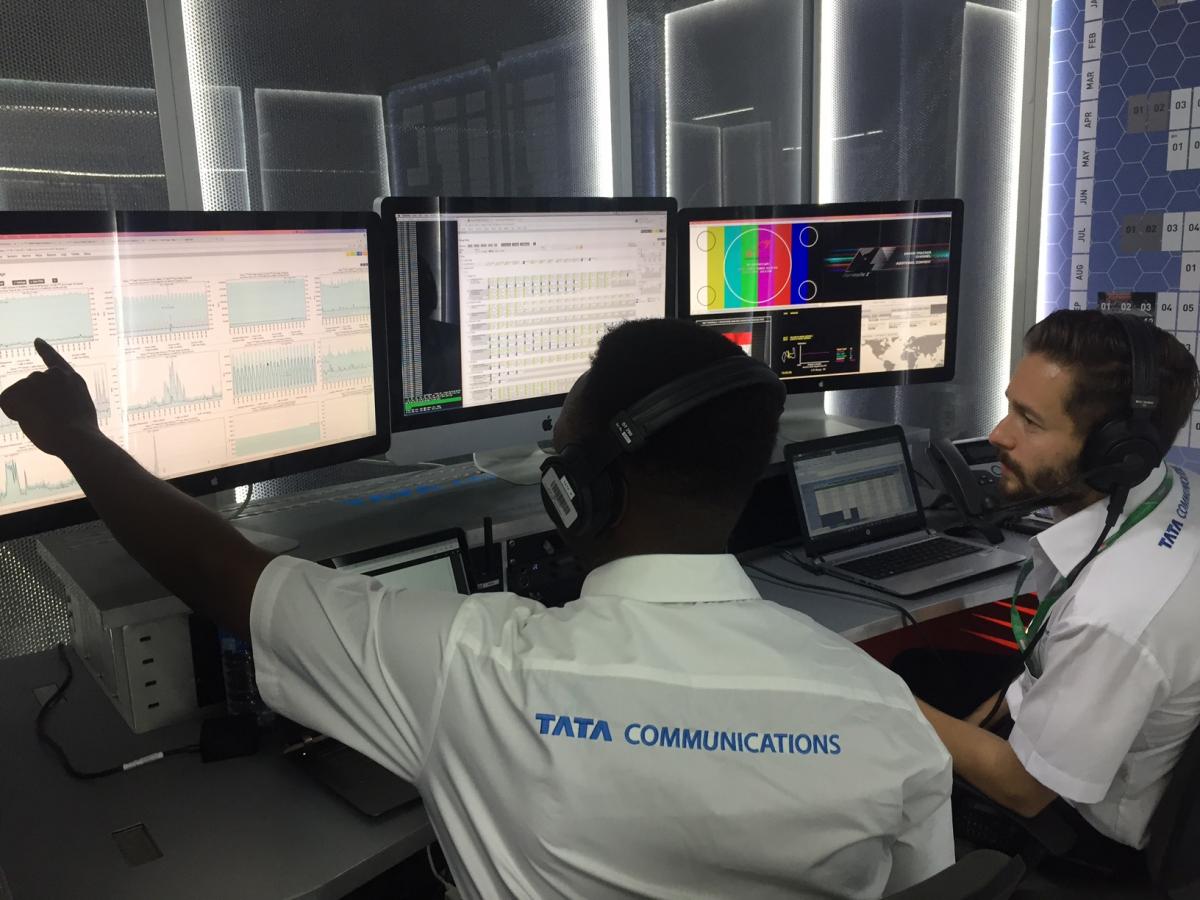 According to the directive, the FCC has earmarked 280 MHz of bandwidth, instead of the originally expected 180 MHz, to be auctioned for mobile network operators. This leaves less than half of the spectrum, about 200 MHz, to be preserved for TV programming. Moreover, the FCC’s announcement of a USD 9.7 billion payout to satellite companies ahead of the 5G auction has introduced further confusion to an already uncertain landscape.

For broadcasters who depend on the C-Band not just for delivery of the content but also for returns feeds and confidence monitoring, the slashing of bandwidth availability comes as bad news in an already challenging ecosystem. These developments could give rise potential challenges for broadcasters such as operational risk with interference at the downlinks and decreased spectrum supply may lead to increase in costs.

The US is not the only country to announce the release of the C-Band spectrum for 5G development. While regions like China and South Korea have been closely following the FCC’s actions with intentions to follow suit, various regions in Europe and Asia have, since 2015, auctioned or allocated the C-band spectrum for mobile broadband. For instance, France has approved the allocation of C-Band licenses through four 50 MHz blocks.

In 2016, the global value of subscriptions and pay-per-view television hit a peak point of USD 205 billion. By 2024, it is expected to drop 17% to USD 171 billion. And according to PwC’s Global Entertainment and Media Outlook, the global spending on traditional television and home video is on a steady decline; estimated to fall to USD 244 billion by 2023. In 2016, this number stood at USD 258 billion.

The drop in revenues and consumer spending is indicative of the challenges that broadcasters face today. Chief among them has been the rise of alternative media channels such as over-the-top (OTT) streaming media services like Netflix and Amazon. A report by MarketsandMarkets estimated the global OTT market to grow at a CAGR of 14%, reaching a value of USD 156.9 billion by 2024. The rapid growth of OTT streaming media and subscription-based video-on-demand (SVoD) viewership, particularly, has had a significant impact on the way content is prepared and delivered.

The major cause of this is a shift in media consumerism. With OTT providers increasingly focusing on high-quality content creation, large segments of the consumer-base are choosing to cut the cord and switch over to video streaming services.

This growth of mobile and streaming services combined with the demand for ultra-HD content is compelling broadcasters to explore efficient ways to manage and deliver content. The relative uniformity of linear television programming is being steadily replaced by a necessity for considerable variety. As a result of this, traditional broadcasters are facing an immediate need to move to a multi-platform, multi-device, bidirectional distribution model.
One outcome of this shift has been the emergence of TV Everywhere.

By operating on a model similar to VoD, TV Everywhere allows pay-tv operators to provide a multi-device on-demand viewing experience as a value-add to retain viewership. But the risks involved have kept many broadcasters from adopting this model. Adopting new media platforms to reach out to the cord-cutting consumer can leave broadcasters potentially vulnerable to security threats.

Moreover, with cutbacks on the availability of the C-band spectrum, wireless mesh networks that use multi-hop uplink-downlink provide broadcasters with an alternate opportunity for international distribution. However, the introduction of intermediary nodes in a multi-hop network could lead to increased latency and risks of leaked or faded information.

The 1980 Winter Olympics held in Lake Placid, New York was the first instance of broadcasters using fiber-optic cable for the transport of broadcast television signal. It was used for a video transmission system for backup video feeds. The 40-year long history of fiber as a medium of transporting video signals is proof that fiber-based broadcasting is an indispensable part of the broadcasting ecosystem.

As the search for alternatives to satellite for broadcasting sports and live events continues, the fiber video distribution medium has evolved as a reliable option for data transmission.

The use of fiber-based video transmission systems in sports and live content broadcasting has come a long way as well. During the 2019 Players Championship in Ponte Vedra Beach, Florida, PGA TOUR deployed a fiber video distribution rack. This allowed them to bypass excessive cable runs and, in the process, make the production more efficient.

Just a yard short: The limitations of fiber-based distribution

The advantages of fiber-based distribution are numerous. However, there are some inherent limitations that continue to restrict broadcasters from adopting a fiber-based distribution model. One such impediment is the limited number of physical endpoints. This issue is most prominent in developing economies, such as India and South Africa, where access to fiber is limited and expensive.

Moreover, a complete shift will require large investments and extensive rearchitecting of the media distribution landscape. The sheer complexity of establishing a massive fiber infrastructure and the associated costs are a major roadblock. A widespread shift to fiber-based distribution ecosystem will either require large-scale addition of new equipment to existing infrastructure at content sources or a massive changeout in equipment and processes throughout the entire delivery chain.

Internet-based Distribution: The Next Frontier of Broadcasting

The growth of OTT streaming media services and broadcasters exploring ways of non-linear media distribution implies one undeniable fact: the internet is going to be the mainstream medium of distribution in the future.

Another factor that works in favor of IP-based distribution is the cost advantage. A 53.6% global online access rate means a majority of the world’s population already has access to the internet. This saves broadcasters the added burden of developing and managing a dedicated delivery infrastructure.

The setbacks of internet-based distribution

Internet-based distribution over an open network, however, comes with its own set of challenges. One of these is the lack of guaranteed quality of service (QoS). Distribution over an unmanaged public internet network means quality is dependent on internet speed and subject to high latency. Subsequently, broadcasters are often apprehensive of its unreliable nature.

The historical dependence on satellite for broadcasting video signals makes it a difficult agent to replace. While fiber and IP-based distribution promise an exciting future for broadcasters, the challenges of an extensive shift to these mediums can prove to be technically overwhelming. This is where media transformation partners come in. By engaging with a media transformation partner, like Tata Communications, for end-to-end satellite-inclusive hybrid IP and dedicated fiber-based transmission services, broadcasters gain the freedom to test content and services in new markets without investing in new infrastructure.

The perks of a hybrid fiber-based distribution network

Take for instance Formula E, the world’s fastest growing motorsport event. In order to deliver worldwide broadcast services, the event needed to overcome challenges like legacy satellite distribution infrastructure, low bandwidth, a fragmented broadcasters base, and audience reach. Deploying a satellite inclusive hybrid fiber-based distribution solution over the internet allowed them to over these roadblocks and deliver broadcasting services tailored to the specific needs of regions.

Similarly, MotoGP organizers, Dorna, partnered with Tata Communications to utilize a mix of satellite-backed hybrid fiber to distribute feed from 19 races. The satellite-inclusive hybrid fiber-based solution by Tata Communications in order to achieve 1 GB of bandwidth per race. This allowed them to deliver more content to broadcasters and distribute the motorcycle action to over 200 million households worldwide.

With the rise of IP-based broadcasting, there is a severe need for managed services in order to provide viewers with a low-latency feed. The concept of IPTV brings together the reliability of satellite-based distribution as well as the operational and cost advantages of internet-based distribution.

Tata Communications’ Video Connect Edge solution helps broadcasters achieve this through its end-to-end managed service layers. Moreover, the solution consists of a majority of the network core bandwidth. By leveraging a global private network followed by public internet for first- and last-mile connectivity allows broadcasters to provide a high degree of reliability through the hybrid network. The platform allows for feeds at an ultra-low latency in sync with satellite distribution.

The fully managed service offered by the Video Connect Edge solution allows broadcasters to operate on their preferred IP-based delivery architecture. Additionally, a strong network presence in Asia, a region with the highest number of internet users, allows us to enable a hybrid satellite alternative for a large segment of potential consumers. Tata Communications’ global private network helps broadcasters leverage the public internet in a managed way through first and last-mile connectivity.

Looking to the Future

The broadcasting sector is not new to disruptions. The industry has successfully navigated technological and cultural waves in the past. And there’s no reason to believe that this wave of disruptions will be any different. In order to do so broadcasters need to undertake the strategic imperative of catering to the dynamic consumer behavior. For an industry like broadcasting, that is largely dependent on a ‘linear’ business model, this may be the most difficult hurdle yet. But by choosing the right technologies and platforms, broadcasters have the opportunity to reinvent themselves in this new world of possibilities.

"Tata Communications’ Video Connect Edge solution helps broadcasters achieve this through its end-to-end managed service layers. Moreover, the solution consists of a majority of the network core bandwidth. By leveraging a global private network followed by public internet for first- and last-mile connectivity allows broadcasters to provide a high degree of reliability through the hybrid network. The platform allows for feeds at an ultra-low latency in sync with satellite distribution."

On 19th November 2019, Ajit Pai, chairman of the United States Federal Communications Commission (FCC), announced a public auction of the C-band spectrum (about 500 MHz of bandwidth between 3.7 to 4.2 GHz) to facilitate the development of 5G. The C-Band, a swathe of satellite spectrum that has been historically used for fixed wireless services, plays a crucial role in broadcasting and live production of content such as news reporting and sports feeds.