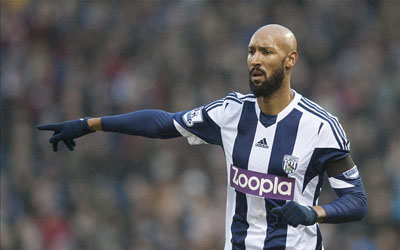 Property search website Zoopla have announced that they will terminate their sponsorship of Premier League soccer club West Bromwich Albion at the end of the current season, following Nicolas Anelka’s controversial ‘quenelle’ celebration.

Anelka, a former international striker for France, made the gesture, which is associated with anti-Semitism, following his goal against West Ham United in December 2013.

Zoopla is part-owned by Jewish businessman Alex Chesterman and have put pressure on the Midlands club to drop Anelka for their match against Everton last night.

The company’s Head of Communications Lawrence Hall said: “Through our sponsorship of West Bromwich Albion we are pleased to have supported the local community and charities. In recent weeks, however, we have decided to re-evaluate this sponsorship and as a result we will focus our attention on other marketing activities from the end of the season.”

Zoopla has been the main sponsor of the Baggies for the past two seasons and their logo appears on the front of the club’s shirts.

They have reportedly invested over £100,000 to the Albion Foundation and other charities in the local community.

West Brom said in a statement: “West Bromwich Albion has been fully aware since the sponsorship agreement came into force in June 2012 that its partnership with Zoopla could expire this summer and therefore has been planning accordingly.

“Zoopla has today informed the Club in writing that it does not wish to extend its sponsorship deal. The Club will now actively seek a new Official Sponsor for next season.”
Have your view on this subject heard in our new discussion