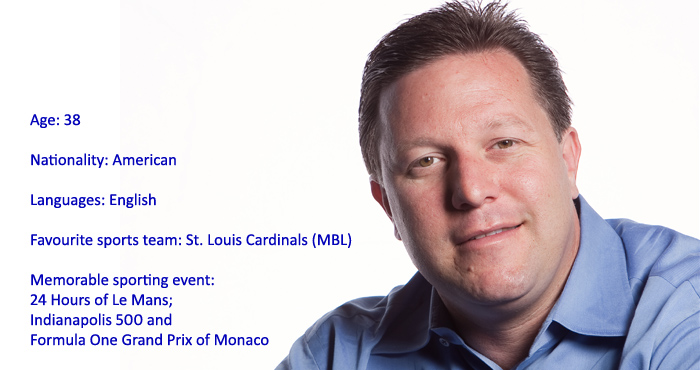 Zak Brown is a former professional race car driver. He founded Just Marketing International in 1995 which became the world’s largest and most influential motor sports marketing services company. He is known as an entrepreneur and as a leader, innovator, deal maker and increasing influencer of all things commercial in the global motor sports industry. Brown and his team have guided clients in all major motor sports series globally, including NASCAR, Formula One World Championship, Indy Racing League, NHRA (National Hot Rod Association), Grand Am Road Racing Association, and the American Le Mans Series. A four-time honoree as an Inc. 500 “Fastest Growing Private Company,” Just Marketing International is now supported by a growing staff of more than 140 employees.

What made you decide to start up Just Marketing International, and was it something you had been planning for a while?

My original and, to an extent, current passion is driving race cars.  That was my sole focus for a number of years.  You can’t race at the higher echelons of motorsport without considerable sponsorship so that naturally put me on the path of partnership building in order to sustain my driving career.  One thing led to another and eventually the business of racing trumped the actual racing, at least for a while.  Today, JMI has about 140 employees, and growing, and is the top motorsports-exclusive agency in the world.  Ironically, it’s coming full-circle because I’m back to racing again in Europe with FIA GT3 and in North America with Legends of Motorsports, a series I’m co-partnered in with fellow historic racing enthusiasts Bobby Rahal and Peter Stoneberg.

Was it a difficult decision to take a break from driving while you set up Just Marketing International?

Probably more emotionally than financially.  One has to pay the rent and marketing became a much more predictable way to do that.

What challenges did you face building the business up, and did find your relatively young age at the time a help or hindrance?

Any time you’re starting out you have to struggle to get that first shot and prove yourself.  Creating initial momentum is often the hardest part.  Because I was comparatively young and aggressive that helped give me the energy and resilience to keep pushing forward.  Anyone who knows me quickly realizes that I’m not easily deterred.  I don’t wilt at the word ‘no.’ It drives me to find a different pathway to ‘yes’.  In terms of JMI, it has grown building on the addition and successes of one client after another.  It took some lean years to become known and respected in the industry but we’re now long past that.

Did you always plan to run a purely motorsports-focused company, or are there plans to expand the business to incorporate other sports?

That’s a question that’s frequently been debated.  Many of our services such as design, hospitality, communications, experiential marketing, etc. are easily applied outside motorsports.  We’ve had those invitations and some have been quite tempting.   Overall, the prevailing philosophy has been to stick to motorsports marketing and focus on being the absolute best at it.

What were the significant moments in the development of Just Marketing International?

There are a number so it’s hard to say.  Certainly the one that is often cited as a huge game-changer for JMI is being part of the initiative that dissolved a more than 50-year ban on spirits producers in NASCAR.  That reversal allowed us to bring our Diageo client head-long into the sport and grab the dominant position for the category.  I’d also rank our first major F1 sponsorships in there as well.  Those gave us international credibility and set the stage for the likes of Johnnie Walker, LG and, just recently, UBS as major clients in Formula One.