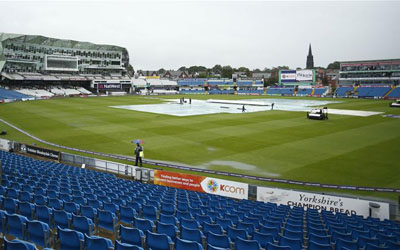 In order to keep pace with other County grounds that hold international crciket, Yorkshire have announced a 20-year plan to revamp their Headingley stadium.

Headingley has struggled to keep pace with major renovations at Edgbaston and Old Trafford as well as the emergence of the Rose Bowl, Chester-le-Street and Sophia Gardens as international venues.

As a result Yorkshire chiefs feared the Leeds ground could lose out on England games in the future.

That would have been a major financial blow and Yorkshire have now unveiled plans for a six-phase renovation which will include the addition of permanent floodlights, the redevelopment of the stand connected to the neighbouring rugby ground and a new pavilion in the north-west corner of the ground.

Yorkshire County Cricket club chairman Colin Graves said on Thursday: “Our ambitions are clear. We want to create a stadium that is amongst finest in the world and enable Yorkshire to continue to stage major international fixtures over the long term.

“It is vital that we don’t lose sight of our objectives. As other venues around the country continue to invest in their facilities, we cannot afford to stand still and expect that Headingley will always host international cricket.

“The stark reality is that if our stadium fails to evolve we will lose our Test Match status, which would be a devastating blow to the region.”

Headingley will host this year’s second Test match against Sri Lanka, beginning on June 20, as well as the fifth one-day international against India on September 5 and will also host a Test against New Zealand and a one-day fixture against Australia in 2015.