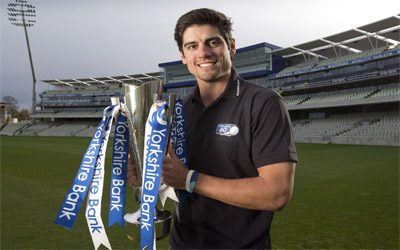 The England and Wales Cricket Board (ECB) has announced that Yorkshire Bank is the new title sponsor of England’s domestic 40-over competition, impotent which will be known as the Yorkshire Bank 40.

The Yorkshire Bank 40 is one of three competitions in the English domestic season and is the only one to hold its final at Lord’s Cricket Ground. It is aimed at sports-loving families and most matches take place on Sunday afternoons.

John Perera, ECB Commercial Director, said: “The ECB and the banks are proud of this long-standing relationship, and we look forward to another great one-day competition this summer.”

Caroline Darnbrook, Head of Brand at Yorkshire Bank, added: “Clydesdale and Yorkshire Banks have been proud partners of domestic cricket and the ECB for seven years.

“Having had great success with the 40-over competition under Clydesdale Bank’s sponsorship and prior to that with both Banks supporting the Twenty20 competition, we are now looking forward to continuing this relationship and support with Yorkshire Bank, at both professional and community levels of the sport.”

Yorkshire Bank will also become the Official Sponsor of the ECB County Cups at U14, U15 and U17 levels as part of the agreement.