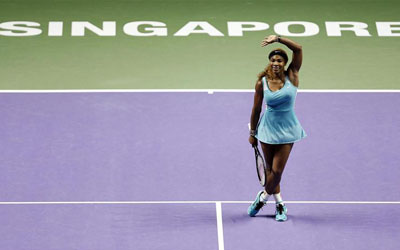 This year’s event staged a series of brand new features, order including a Fan Festival around the state-of-the-art Sports Hub as well as events throughout the city, health the WTA Legends Classic, WTA Rising Stars Invitational and a 14 & Under and 16 & Under WTA Future Stars Junior Road

The Singapore showpiece attracted more than 129,000 fans to the Sports Hub during the 10 days of tennis, entertainment and business with over 93,000 attending the matches at the Singapore Indoor Stadium Center Court.

The final matches on Sunday, October 26 drew sell-out crowds of 9,986 fans as Serena Williams defeated Simona Halep for the title.

Four of the 11 sessions held at the tournament were sold out, with all sessions being near-capacity as the attendance mark was the highest since 2000. A record $6.5 million (£4 million) was on offer.

The success of the tournament was also illustrated by a record TV broadcast footprint of 177 countries, 63 broadcasters and over 4,500 hours of coverage. The number of media in attendance to cover the event from around the world tripled compared with 2013.

“The BNP Paribas WTA Finals Singapore presented by SC Global has been transformed into the most fan-friendly sport-entertainment spectacle in the illustrious history of our sport’s season-ending finale,” said Stacey Allaster, WTA Chairman & CEO.

“In our historic first year of the WTA Finals in Asia-Pacific and Singapore, our players once again showcased through their athleticism and competitive spirit to win and demonstrated match after match why women’s tennis is the world’s leading professional sport for women.

“The mission to integrate our Legends and Rising Stars into the event, expand the format to showcase doubles even more and bring the tennis environment closer to the fans through greater accessibility than ever before is a fantastic start in this first of five years in Singapore.

“I want to thank our amazing fans and partners – World Sport Group, Singapore Tourism Board and Sport Singapore – for all of their efforts in making our inaugural WTA Finals in APAC the best in the history of the WTA.”

“Singapore is an amazing city and their fans and the organizers have been fantastic hosts during these past 10 days.  I can’t wait to compete again next year with the goal of being back in Singapore in 2015.”

“We are thrilled by the phenomenal success of the inaugural BNP Paribas WTA Finals Singapore presented by SC Global,” said Andrew Georgiou, CEO of World Sport Group, the event promoter.

“Singaporeans and fans from abroad have really embraced the WTA Finals, showing up in full force over the 10-day festival to watch some of the best tennis in 2014.

“Before the event started, we set ourselves the goal to have over 100,000 fans attend the various activities throughout, and we are delighted that we have well and truly exceeded that target.”

“In addition to the amazing atmosphere created by the fans, the feedback from our corporate partners, media and the entire tennis community has been extraordinary. There is little doubt that this event is now a must-attend event on the Singapore calendar.”

2014 marked the first of five years in which Singapore will host the WTA Finals. The 2015 edition is scheduled to take place October 23-November 1, 2015.