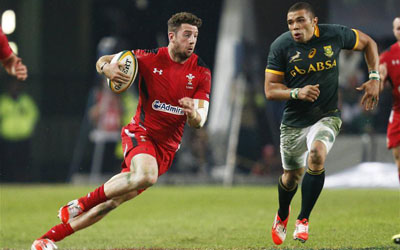 The The Welsh Rugby Union (WRU) has signed a two year extension with Admiral, the title sponsor of Welsh rugby, until 2015.

Admiral’s logo first appeared on the Welsh jersey in 2010 and will now be retained until the Rugby World Cup in 2015.

CEO of WRU, Roger Lewis said: “We are delighted to be able to welcome Admiral on board for a further two years.

“It is always pleasing when a partner is interested in renewing sponsorship, it tells us we are doing something right and it is testament to the power of the WRU brand that a major company in Wales is now signed up until 2015.

“After a major sponsorship announcement like Admiral in 2010 there is a lot of hard work which goes on behind the scenes from both parties to ensure the partnership works.

“It is encouraging news for everyone at the WRU to know that Admiral can be counted as a satisfied customer in that respect, but it is also a huge endorsement of Welsh rugby as a whole that we can command and retain the interest of such a major blue chip company.

“Welsh rugby is a brand which defines Wales as a nation and it is important for us to have amajor corporate alliance with our jersey sponsorship.”

Admiral strongly believes in the importance of a happy and motivated workforce and its staffhave been thrilled with this sponsorship and the benefits they have received.

“To see the Admiral on such an iconic shirt gives all our staff and their families an immense feeling of pride,” said Louisa Scadden, Director of Communications.

“Our sponsorship with the WRU has always been about giving something to our staff and the success of this partnership over the last three years has clearly exceeded our expectations. Our staff have really embraced the partnership and it was obvious we should continue working with the WRU.

“We wish theboys well in the rest of championship.”