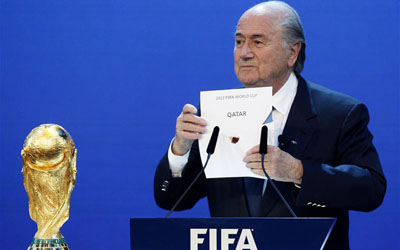 World Cup sponsors have showed their hand by voicing concerns over the corruption allegations surrounding the awarding of the 2022 tournament to Qatar.

Oil company BP and the maker of Budweiser beer on Monday joined adidas, Coca-Cola, Visa and Sony who have made their opinions official.

The statements come on the day when former U.S. prosecutor Michael Garcia was due to finish an investigation on behalf of soccer’s ruling body FIFA into the decisions to hold the Cup to tiny Qatar in 2022 and Russia in 2018.

With the World Cup kicking off in Brazil in three days, FIFA is struggling to contain the fallout from claims that bribery helped Qatar to secure the showpiece event.

Garcia will submit his report to FIFA in around six weeks’ time – roughly a week after the World Cup final in Rio de Janeiro on July 13. If he finds corruption, soccer officials say Qatar could be stripped of the 2022 Cup.

Both Qatar and Russia deny any wrongdoing. Qatar’s bid in particular has been the subject of media leaks alleging that the former head of soccer in Asia, a Qatari, bribed colleagues around the world to help secure the bid. The former official, Mohamed Bin Hammam, has declined to comment. He has been banned from football for life over separate corruption allegations.

Sponsors who pay hundreds of millions of dollars for the “halo effect” of associating their brand with the World Cup have broken with protocol and publicly demanded that FIFA to get to the bottom of the corruption claims.

“We are concerned about the situation and are monitoring developments; we expect FIFA to take all necessary steps to address the issue,” brewer Anheuser-Busch InBev said in a statement. Its Budweiser beer has signed up as a World Cup tournament sponsor until 2022.

BP, whose Castrol oil brand is sponsoring the World Cup in Brazil, said it expected FIFA to deal with the issue in a “right and proper manner.”

Qatar’s bid has attracted controversy from the outset because of the extreme summer heat during the months when the Cup is played, and the tiny country’s lack of domestic soccer tradition. If it goes ahead, the tournament is expected to be switched to a date later in the year, creating costly scheduling headaches for broadcasters and European club soccer clubs.

Sony, Adidas, Visa, Coca-Cola and Hyundai, all members of the top tier of FIFA sponsors, spoke out on Sunday in favour of a thorough investigation of bribery claims. Of the top tier sponsors, only Emirates airlines has yet to voice their opinion.

“The negative tenor of the public debate around FIFA at the moment is neither good for football nor for FIFA and its partners,” said German sportswear company adidas, which has signed up as FIFA sponsor until 2030, extending a partnership dating back to 1970.

FIFA, which Blatter has led since 1998, earned almost $1.4 billion last year, including more than $600 million from the sale of broadcasting rights and more than $400 million from sponsors and other marketing partners.

FIFA issued a statement from the body’s marketing director Thierry Weil stating: “Our sponsors have not requested anything that is not covered by the on-going investigation by the Ethics Committee.”