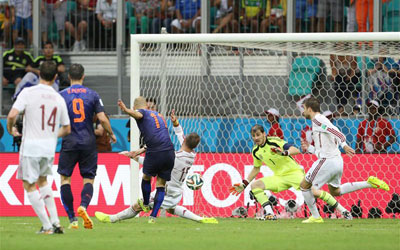 Following the first round of matches at the 2014 FIFA World Cup, capsule television coverage broke a whole host of viewing records.

Opening matches set new audience highs for 2014 all over the world as fans watched in record numbers in countries such as Brazil, Japan, Germany, the United Kingdom, Argentina, France, the Netherlands, Croatia and Italy. An all-time high was set in the French-speaking part of Belgium.

The viewing figures also revealed an impressive increase in the United States, Canada and Australia, where the World Cup is helping to drive interest in the game to new levels.

Some of the key figures include:

“These record-breaking figures show just how popular football and the FIFA World Cup are across the world, from Japan to Argentina,” said Niclas Ericson, Director of FIFA TV. “We are seeing highly encouraging growth in interest in markets such as the United States and Australia.”

“The FIFA broadcast production of all World Cup matches makes this competition truly global and accessible for fans all over the world. It therefore plays a crucial role in supporting FIFA’s core mission to develop football everywhere, and for all.”