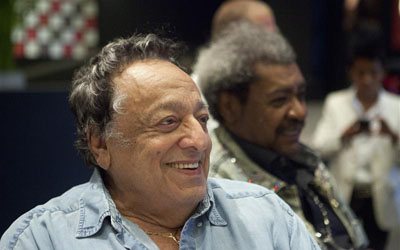 The 82-year-old Mexican had been in intensive care at the University of California Hospital in Los Angeles since undergoing heart bypass surgery last October.

The son of a Syrian mother and a Lebanese father, Sulaiman boxed as an amateur before switching to a career as a referee, trainer and boxing promoter.

He took over the presidency of the governing body in December 1975, was voted into boxing’s Hall of Fame in 2006 and in November of last year was named ‘President For Life’ by the WBC at its convention in Bangkok.

In a statement, the WBC said: “We deeply regret to inform the passing away of our dearest president Don Jose Sulaiman, may he rest in peace.

“Jose will be remembered as a man of integrity, honorability and pure heart. Inspired by his heroes, believed in unbreakable values and principles and lived a life to the fullest.

“Many call him the father of boxing; he certainly treated all fighters as his sons and daughters, he suffered from their problems and worked every single day of his life to try to make boxing better and safer.”

On behalf of the global boxing family and the International Boxing Association (AIBA), Dr Ching-Kuo Wu stated: “I would like to send to his family our sincere condolences for the sudden death of one of the most important figures in our sport worldwide, Don José Sulaimán Chagnón.

“Though we had different approaches to develop our sport in the past, the development of boxing for the best interests of boxers and coaches has always been our mutual common goal.

“Therefore, I believe his lifetime contribution and dedication to the development of boxing will be left in the hearts of the global boxing family and recognized as our sport expands continuously.”

Sulaiman’s son Mauricio, who joined the WBC as public relations director in 1992, is widely expected to succeed his father as president.