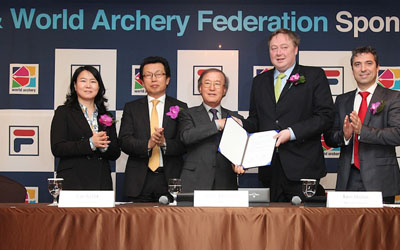 World Archery to be Sponsored by FILA

World Archery (WA) has added sports brand FILA to their list of sponsors for the World Cup and World Championships circuit.

The agreement will run for four years and will provide WA judges, capsule officials and staff with FILA clothing.

FILA Chairman Mr Yoon said: “This is a very significant moment as we are celebrating the partnership of FILA and the World Archery Federation for the next four years.

“Archery is a very popular sport in Korea. Ms KIM Soo Nyung, viagra one of our honoured guests today, impotent remains the greatest archer, whose unbreakable world records are telling of archery’s status as a top sport in Korea.

“We are deeply honoured to be the sponsor of the World Archery Federation and we are promising that we will do our best to help the long-term success of World Archery”.

World Archery Secretary General Mr Dielen added: “Archery allows a partner such as FILA to be visible in very exciting venues like the World Cup Final in Paris later this year, where the arrows will be shot at the Trocadero Fountain with the Eiffel Tower behind the targets.

“Archery also brings FILA to join other major global brands such as KIA Motors, Turkish Airlines and Longines as partners of an important core Olympic sport and I am convinced that today is the start of a long-term relationship between FILA and World Archery”.