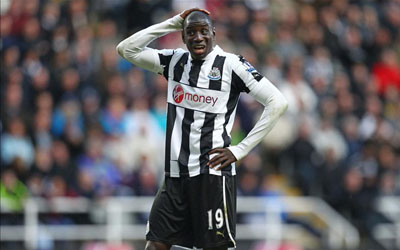 In addition to sponsoring the team shirt from the start of the 2013/14 season and working on a range of other initiatives with fans, Wonga will invest at least £1.5m in two of the Club’s most important projects.

Wonga is investing in Newcastle United’s young talent by providing significant financial support for the Academy. The investment will enable the Club to transform its Academy into one of the leading centres of youth football development in the country, enabling us to nurture the top playing stars of the future.

The Academy has around 150 boys between the ages of nine and 18 on its books. In addition to standard evening and weekend training sessions, the Academy has 35 boys attending on weekday afternoons from Monday to Thursday for classroom learning as well as training.

Wonga has also committed to invest in the Newcastle United Foundation Enterprise Scheme. The existing programme helps 15-16 year-olds find employment by developing their skills and experience through practical and educational courses. Wonga’s investment will vastly expand the scheme and help more young people in the North-East in their future careers.

Other initiatives with Wonga will include a straight talking forum with the fans for discussing ideas for fan involvement in the Club and working on a specific new initiative to involve fans in the design of the shirt.

Derek Llambias, Managing Director of Newcastle United, said: “We are building a club that can regularly compete for top honours at the highest level.

“As everyone knows, a strong commercial programme is vital to this goal and I am delighted to welcome Wonga into the fold as our lead commercial partner, alongside Puma and Sports Direct.

“Throughout our discussions Wonga’s desire to help us invest in our young playing talent, the local community and new fan initiatives really impressed us and stood them apart from other candidates.”

Wonga provides small, short-term loans online and via smartphones. To date the company has provided over six million loans, while generating industry-leading satisfaction rates from customers.

“It is one of the biggest and most important clubs in the UK by any measure and has a fantastic following around the world. We’re also really excited about investing in future stars both on and off the field. The Academy and the Enterprise Scheme gives us the opportunity to make a big difference.

“We have just launched our small business offering and there are more great products to come. We know our customers love football and it goes without saying that, alongside Newcastle United, we will continue to support Blackpool and SFA Cup Winners Hearts.”

Steven Falk, Director of Star Sports Marketing and former Marketing Director at Manchester United, told iSportconnect: “Times is tough up north. The reported details of Newcastle Utd’s prospective deal with Wonga.com demonstrate how difficult it is in the current market to secure sponsorship.

“The £8m pa reported does look low when compared to recent shirt deals completed by the likes of MUtd, MCity and Liverpool, but it stacks up reasonably well with most other PL clubs and is a lot more than they were getting from bust bank Northern Rock.

He also told iSportconnect: “Of more concern may be the reaction of Newcastle’s second tier sponsors to their forced brand association with a payday loans company. In today’s market a club has to take what’s on offer. I’m sure Manchester Utd’s new shirt sponsor Chevrolet can’t wait to see their brand linked with the club’s salted snack partner Mr Potato!”