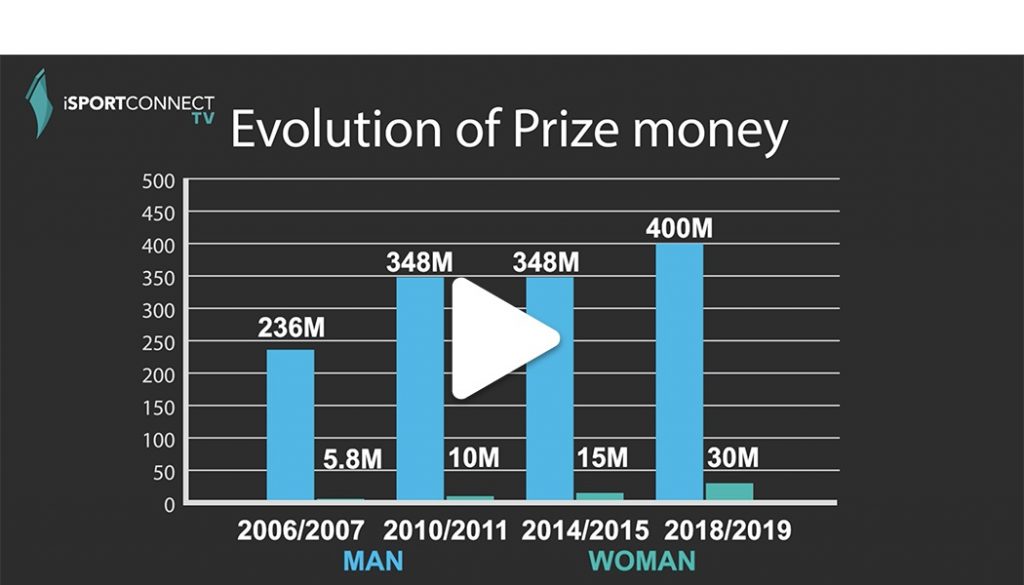 The USA women’s national team (USWNT) won their 4th world cup, beating Netherlands 2-0 in the final of Women’s World Cup 2019, cementing their dominance in women’s football. They came as title holders and top favourites and did they shine – the US ladies finished the tournament with an impressive 26-3 goal difference in 7 matches. Their co-captain Megan Rapinoe has won the Golden Boot as the World Cup’s top scorer, and also won the Golden Ball, awarded to the tournament’s top player. Watch the full report on iSportconnect TV.

Twenty-eight years after the inaugural Women’s World Cup in China, women’s football can boast spectacular development. Levels of participation, competitiveness, global awareness and exposure have grown at an unexpected, fast pace in recent years. The recent tournament in France surpassed several records, and also demonstrated an unprecedented rise in women’s football. VARVAR was used for the first time and 24 teams competed for the first time in 52 games, offering good football, passion and excitement, massive attendance and growing commercial appeal. In addition, the World Cup could be a turning point in changing attitudes: it has given broader exposure to gender issues as well.

The tournament had a strong average attendance of 21,756. Matches of the host nation France, as well as the final, sold out quickly after tickets went on sale. Some group matches, especially in the south, attracted only modest crowds though – for example, Cameroon beating New Zealand 2-1 in Montpellier was seen only by some 8,000 fans. Obviously, the attendance figures of previous tournaments in the US or China, with bigger stadiums and audiences, were hard to beat.

The number of television viewers of the women’s game has been increasing steadily over the past few tournaments, too. The 2019 tournament has set several new viewership records for various countries, as 62 countries held TV rights to broadcast the tournament compared with 37 in 2015. The total global TV audience for this year’s WWC is estimated to be over one billion, about a third of the viewers of the men’s last World Cup in Russia last year. In the UK, for example, England’s semi-final defeat to USA was watched by 11.7 million viewers, the most-watched British tv broadcast of the year. By comparison, a peak audience of 26.5 million viewers tuned in to see the England men’s team’s World Cup semi-final defeat to Croatia a year ago. As international tournaments of national teams represent the major driver in women’s football by reaching much larger audiences than club football, such successful tournaments can help grow interest in domestic football, as well, something which is key for further development.

Tickets were available for as low as EUR 9, while the most expensive general admission ticket for the final was EUR 84. By comparison, the cheapest group stage tickets at the 2018 men’s World Cup in Russia started at EUR 90. Nevertheless, ticket prices for the USA-France quarterfinal match soared since the tie was set, with several tickets in the USD 1-3,000 range on the black market

As commercial appeal is increasing, economic growth of the women’s game is also picking up pace. For the recent World Cup FIFA had six main partners: Adidas, Coca Cola, Wanda, Hyundai/Kia Motors, Qatar Airways and Visa, while six national event specific sponsors joined in too. The 24 participating teams were sponsored by six different kit suppliers: Nike supported 14 national teams, followed by Adidas with six, while Le Coq Sportif, Puma, Umbro and Warrix all supported one team each.
Multinational companies are getting behind the women’s game as sponsors beyond this world cup too: the partnership between Visa and UEFA includes the European Championship and Women’s Champions League as well, and Barclays joining the Women’s Super League in England as title sponsor are seen by many as milestone moves in 2018-19.

Women’s football still an inferior segment of the game

Some controversies at the tournament, however, are seen as consequences of women’s football still being treated as inferior. Both footballers and coaches have complained about using WWC as a “guinea pig” for some new rules, to which parallel men’s continental competitions did not have to apply, although they should have been implemented universally as of 1 June. Scheduling has also been criticized by many: as the finals of two concurrent men’s continental tournament (Copa América and the CONCACAF Gold Cup) were held on the same day (7th July), WWC 2019 has not received adequate prime attention. Media reports have also pointed out that outdoor advertising of the World Cup across France was scarce and insufficient

The allocated prize money is even more telling. The doubling of the prize money compared to that of the previous (2015) WWC is a sizeable development, however, that amount is dwarfed by the USD 400 million prize money distributed at the men’s World Cup last year in Russia.

Soccer, as the Americans call it, is the fourth most popular (and the third most-played) game in the US. What is most unique, is that in the US women’s football matches are seen by more people than men’s, and they are also more successful than their male counterparts. The US women’s national team has won now four World Cup titles and four Olympic gold medals, while the men could reach only the quarter final once at a world cup.

The global dominance of the US women’s team is more obvious, if we consider the number of registered women players per country – the US have 1.6 million registered players, far ahead of second-placed Canada with 290,000 players. The “last 8” at the WWC 2019 featured only countries that have registered female players in the 1- 200,000 range, with the only exception being Italy, which has only 70,000.

Without exaggeration, the US Women’s National Team (USWNT) is the most successful team in the history of women’s football. They can boast of having true celebrity players, too. Alex Morgan, the 29-year-old co-captain of the US team is a superstar in her own right – she has a degree in political economy from the University of California, Berkeley, is an author of children’s books, has 6.3 million followers on Instagram (more than Liverpool star Virgil van Dijk), and is one of the faces of the team’s fight for equality. Megan Rapinoe, who won both the Golden Boot and the Golden Ball of this year’s tournament, is the other one: her bold stance for equal rights prompted a chorus of defiant chanting from fans – “Equal pay! Equal pay!” – at the final, minutes before the arrival on the pitch of FIFA president Gianni Infantino to congratulate the winning team.

Therefore, it comes as no surprise, that the US women’s squad have taken the lead in confronting gender inequalities in football. In March, they filed a lawsuit against the US Soccer Federation, demanding equal pay and alleging “institutional gender discrimination”. They claim that despite performing better than men, their annual salary from the Federation is roughly a third of what the Men’s National Team members receive. They also complain about having inadequate facilities and equipment, poor accommodation when travelling, and not getting the same level of marketing support as the men’s games, which reduces their revenue potential. The Federation rejects these discrimination allegations and argues that any differences are the result of pure business: the two teams represent a different commercial appeal as well as collective bargaining agreements. The outcome of the debate is yet to be seen, but it will surely affect the future of the women’s game.

Interestingly, sponsors were quick to follow suit. Adidas announced in March that the players they sponsor on the winning team of the upcoming World Cup will receive the same performance bonus payments as their male counterparts. Right after the US team’s win, Nike launched a new ad, extending its congratulations with a powerful message to inspire future generations “to be like Megan Rapinoe”, and “be inspired to talk and win and stand up for themselves” and for equal rights.

Situation often worse outside the US

A key factor towards further development of women’s football is the evolution of professional domestic leagues, providing sufficient, scheduled games, proper infrastructure and warranting the professional status of players.

Unfortunately, this is not the case, even in consideration of the divisions of the 24 participating countries of the 2019 FIFA Women’s World Cup. Currently, there are few clubs that provide full-time professional employment and adequate working conditions to their women players. Even the biggest leagues have only 16 teams, while on average, they have just over 11 participants. The seasons are relatively short, consisting of 100-150 matches in total, which is not enough for these teams’ sustained development. There are players who sign for two clubs in different countries in order to play as many matches as possible. Written, detailed contracts are rare, and payments are often late. While countries vary to a great extent in this regard, most players are paid less than USD 600 per month, which is scarcely enough to make a decent living. Male footballers at elite clubs (usual participants of UEFA Champions League) usually earn more in a month than what the best paid female players earn in an entire year.

Nevertheless, while there are significant geographical differences, overall interest in the women’s game has been increasing locally, too. Showpiece games produce attendance records, although with some tickets discounted or free. Earlier this year, Atletico Madrid Femenino v Barcelona Femení attracted over 60,000 fans in Wanda Metropolitano, while Juventus Women hosting Fiorentina broke the Italian record with 39,000. The regular attendances at women’s domestic club football matches, however, is far lower: Atletico have around 600 fans per game, while Juventus have an average of about 500. The most popular women’s teams in Europe also have an average crowd of only less than 2000 per game.

Meanwhile, more and more established men’s clubs are launching professional women’s teams all over Europe. In June, Real Madrid announced that they would field a women’s team from 2020 on – interestingly, all 10 of the most valuable football clubs (according to our latest club valuation report) will have now their own women’s teams: Real joining Manchester United, Bayern München, Barcelona, Manchester City, Chelsea, Liverpool, Arsenal, Tottenham and Juventus.

The governing bodies (FIFA and UEFA) and many national football associations have realized the vast potential in women’s football and are determined to help the women’s game grow. Using the momentum, right before this year’s final, FIFA president Gianni Infantino set out a 5-point plan to make sure football seizes the opportunity. He wants to double a planned $500m investment in women’s football in the next four years, increase the size of the Women’s World Cup to 32 teams and double its prize money to USD 60 million. He also aims to launch a women’s Club World Cup, an annual global competition, featuring 16 of the world’s top women’s domestic teams. UEFA have also introduced their first “Women’s Football Strategy” focusing on the 2019-24 period, aiming to give “the best possible platform for women’s football to thrive”. Goals include to double participation in UEFA’s member associations to 2.5 million, change the perceptions of women’s football across Europe, double the reach and value of the UEFA championships and improve player standards in all 55 member associations. In addition, such news that the English Premier League may take over the running of the English Women’s Super League, and some WSL matches will be played as double-headers alongside Premier League fixtures next season, also foreshadow further major steps in the development of the women’s game.