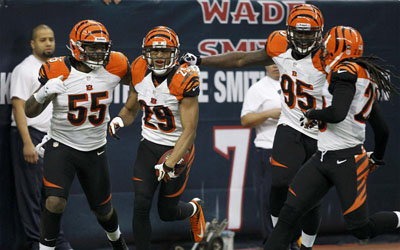 WLWT Gets Rights to Four Cincinnati Bengals Games During 2013

The games against Atlanta (August 8), Pittsburgh (September 16 & December 15) and Miami (October 31) will all be televised on the channel

In addition to its role as the only Cincinnati broadcaster for the Bengals scheduled December appearance on NBC’s Sunday Night Football, WLWT has worked with the NFL to acquire rights as the local non-cable simulcast provider of the team’s three other prime time games. Two of those will be aired by ESPN and one by NFL Network.

“We appreciate Channel 5’s strong interest in airing Bengals football,” said Bengals executive vice-president Katie Blackburn, “and we look forward to working with WLWT on additional programming that will accompany the game broadcasts. We think it’s a plus for our fans to be able to easily remember that all of our evening games will be on the same station.”

Richard Dyer, President and General Manager of WLWT, said: “We are extremely excited to expand our commitment to Bengals football for the upcoming season and look forward to being the local primetime home for fans in 2013.”