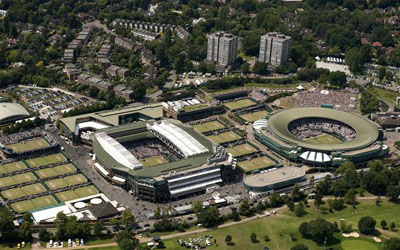 Ticket demand for the 2014 Wimbledon Tennis Championships are down because of the public focus on the FIFA World Cup in Brazil.

A report on the Forbes website has said that the heavy interest in Brazil 2014 around the world and in England has led to Wimbledon ticket sales falling from last year’s tournament.

Michael Bernstein of Tennistours.com said that Wimbledon demand is down 20% this year, capsule from 2013, with World Cup interest being attributed to most of the fall.

However, despite interest in the World Cup expected to continue as the knock-out phase approaches, Forbes writer Jesse Lawrence predicted that England’s elimination in Brazil could lead to higher Wimbledon audiences.

Lawrence wrote: “Last year demand did not peak for Wimbledon until Andy Murray made the men’s final with a chance to break a 77-year streak without a British man winning the tournament.

“Secondary market prices to see Murray in 2013’s Wimbledon final were 400% more expensive than his appearance in the Olympic final on the same court a year earlier.

“If the demand does not immediately rebound after England’s World Cup loss, another run from Murray to the final would likely be a spark.”

The World Cup and Wimbledon overlap, with the Brazil tournament running from June 12 to July 13 and the tennis event from June 23 to July 6.

Exciting periods in both events also overlap, with the last round of semi-finals in the World Cup set to be played on July 5 and three of five finals matches at Wimbledon being played on the same day.