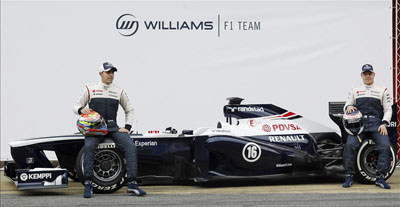 The Williams F1 Team have announced today that it has signed a renewed partnership agreement with Wihuri, symptoms one of Finland’s most respected business enterprises.

The new partnership agreement will see the Finnish company increase its level of commitment to the team for the 2013 season.

The Wihuri logo will feature on the rear wing end plate of the Williams Renault FW35 in all races outside of Europe and North America.  In Europe and North America, price order the logo featured on the rear wing end plate will be Wipak and Winpak respectively, each being divisions of the Wihuri Group. The Wihuri logo will also feature on the drivers’ helmets and overalls, as well as team clothing.

Juha Hellgrén, President and Chief Executive Officer of Wihuri, commented; “We have thoroughly enjoyed our relationship with the Williams F1 Team so far and partnering with such an iconic team on a global stage has afforded us excellent brand exposure.  Increasing our commitment for 2013 was a logical step and I look forward to seeing our partnership with the Williams F1 Team go from strength to strength.”

Sir Frank Williams, Team Principal of the Williams F1 Team, added; “It’s great that Wihuri have decided to increase their involvement with the team and this new agreement demonstrates the success of our partnership to date.  2013 will prove very exciting for both Williams and Wihuri and we’ll see Valtteri start his career as a fully fledged Formula One driver.”

This follows Williams announcing partnerships with Experian and Randstad yesterday at the unveiling of their car.