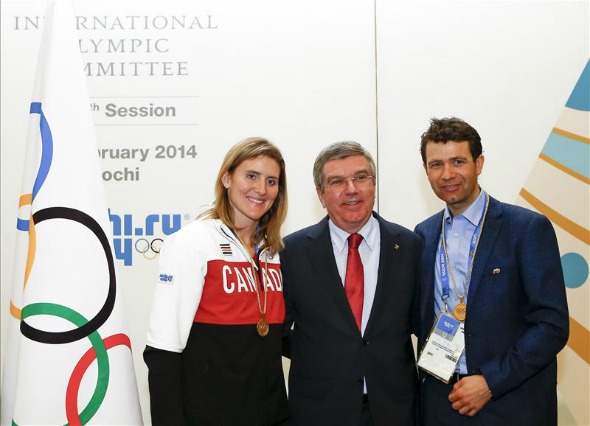 With the Olympics fast approaching, the IOC remains in the spotlight with the doping scandal that could overshadow the Games.

With each passing week more details emerge on doping scandals. Athletes from 2008 and 2012, have been caught with retrospective testing, and crucially two major countries may not be in Rio.

The decision on Russia’s participation in the Games is set to take place within the next 24 hours while Kenya also remain in limbo.

This is compounded by the report from WADA yesterday which revealed that anti-doping officials in Russia are being stopped from testing athletes and being threatened by security services.

She believes that the repercussions if the IOC fails to deal with the issue properly, could be enormous.

“The Doping scandal is the biggest issue, there’s no question that this is a watershed moment for the Olympic movement, if the IOC doesn’t handle this properly, then it could really taint the Olympics forever.

“The athletes at the IOC athletes’ commission are pushing to make sure the IOC is doing the right thing and taking the harshest of sanctions for athletes who fail tests, and protecting the clean athletes of the world.

“I don’t think the Olympic movement has ever seen a scandal, or doping, on this level in the history of the Games than it is seeing right now, there’s a lot of stuff to think through.”

While the issue seems to have rocked the Olympic movement, Wickesnheiser doesn’t see this as an IOC-only issue.

“This is an IOC matter that we have to deal with – but this is a widespread sporting issue; to think doping is isolated to the Olympic Games or just a few sports is naive, I think it’s widespread and pretty deep, we’ve got to clean it up.”

“Right now it’s the reanalysis of the Sochi lab, we’d like athletes to be present and for the process to be video-taped. To make it clear that the process was done well.

“We need to figure out if state-sponsored doping took place, if it’s possible to prove that with respect to the Russians.”

“I think the second thing is the decision with the IAAF and the ban on the Russian Track and Field (ARAF). It will be a big moment – there are key decisions to be made and not much time to go until Rio.”

If the doping scandal wasn’t bad enough, the Zika virus is also causing the IOC headaches.

It’s such a cause for concern, several media outlets have suggested the World Health Organisation should look into postponed, or even cancelling, the Games.

American Cyclist Tejay van Garderen, according to People magazine, is the first Olympic hopeful to have withdrawn from the Games over fears of the virus.

But Wickenheiser doesn’t believe the IOC have considered postponing the Rio games.

She said: “There’s been talk of the games being postponed – I don’t think it has got to that level at the IOC.”

“I think there continuing to work with the WHO on what is the latest situation with regards to Zika. The reality is there are 59 countries in the world currently facing the Zika virus, but there are many more virus’ and all sorts of things that they have to face – Zika is just one of them.”

“I’m personally going to Rio, I don’t think I will be unsafe, I think it’s just about managing the risk.”

With the WHO due to look deeper at the risk of staging the Games, and the IAAF due to rule on the non-compliant countries, the Olympics face a crucial month.

Five-time Olympic medalist, Hayley Wickenheiser is regarded as one of the best female hockey players in the world with an uncompromised determination and dedication to her sport. However, it’s not just her lethal slapshot that is respected by her teammates, fans and peers; Hayley is also an award winner, community leader, mentor, history-maker and an accomplished businesswoman.

In the fall of 2011, Hayley was bestowed one the country’s highest civilian honours when she was amongst 50 notable Canadians appointed to the Order of Canada “for her achievements as an athlete and for her contributions to the growth of women’s hockey.” Most recently, she was inducted to Canada’s Walk of Fame.

Her election by her fellow competitors to the IOC in 2014 is one of Hayley’s personal greatest career accomplishments. She takes it as a grand honour and a grand responsibility to represent the voice of Olympians the world over. Hayley sits on both the Athlete’s Commission and the Medical Commission.