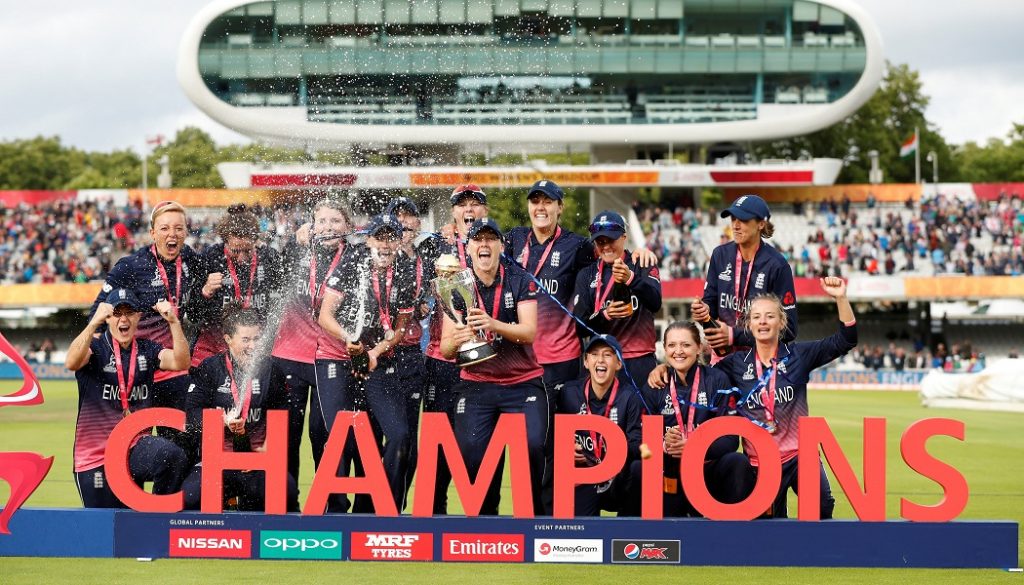 England defeated India by nine runs in front of a sell-out crowd at Lord’s and a UK television audience equal to the average for a Premier League football game.

To some extent the ICC was fortunate that the home team, England, and the most popular team, India, came together in the final. A close competition over four weeks saw little between the top five of the eight participants, with South Africa and Australia both missing out in thrilling semi-finals.

New Zealand were the unlucky fifth courtesy of a shock elimination at the last-four stage. Defending World Twenty20 champions West Indies had some very disappointing performances to finish sixth.

Sri Lanka and Pakistan rounded out the field, but Sri Lanka’s Chamari Athapaththu produced the highest score of the World Cup against the Australians.

England’s triumph saw them given generous back page space in the national papers alongside Jordan Spieth, winner of The Open, and Chris Froome, winner of Le Tour. The likes of Heather Knight, Tammy Beaumont, Nat Sciver and Anya Shrubsole captured the imagination. A tweet by Shrubsole’s father, Ian, of a photo of a ten year-old Anya dreaming of playing on the Lord’s Cricket Ground went viral.

For India, their rise to the final was all the more extraordinary. They had to come through a qualifying tournament earlier this year to reach the World Cup, having missed the cut for automatic qualification after forfeiting matches against Pakistan last year in the home-and-away ICC Women’s Championship league.

Mithali Raj, Jhulan Goswami, Deepti Sharma and the rest of the team have been feted as heroes in a country whose attitude to women’s cricket has historically been lukewarm at best. However, Harmanpreet Kaur’s devastating innings of 171 not out against Australia in the semi-final has probably done more than any other single event to advertise the women’s game to a mainstream Indian audience.

With this being the first Women’s World Cup held during the ICC’s current eight-year media rights cycle, the governing body’s decision to televise every match, either through broadcast television or online streaming, played a significant role in raising the profile of the event.

The total prize pool for the World Cup, $US 2 million, was ten times that of the 2013 event. England received $660,000, while India took home $330,000 as runners up. By comparison, Pakistan’s men received $2.2 million for winning the Champions Trophy in the previous month, from a total tournament prize pool of $4.5 million.

Will Women’s Cricket be able to retain increased interest in the sport after the World Cup?

Where to next for women’s cricket? The momentum of England’s victory will carry into the six-team domestic Kia Super League commencing on August 10. India’s players return to an extensive, but lowly paid, series of state-based competitions scattered throughout the season (including, it must be said, a tournament of three-day matches, something neither England nor Australia have).

The cry for a women’s Indian Premier League has begun, but what form would a ‘WIPL’ take? The Australian model of a Women’s Big Bash League with teams sharing the same facilities and marketing as their male counterparts has been highly successful after two seasons. But could we imagine, say, a Queens XI Punjab playing double-headers with the Kings?

There may be opportunities for some of the unsuccessful bidders for IPL franchises as well as new ventures to enter the marketplace for WIPL teams. I personally think a model similar to the WNBA and NBA in the US could be applied whereby franchises run independently of the men, play their tournament in the men’s off-season and are not necessarily owned by a men’s team.

The BCCI has a long history of being dragged kicking and screaming to embrace the women’s game, but with the unexpected impetus of a successful World Cup behind them, the possibilities rgearding a WIPL open up new frontiers.

Considering how quickly the IPL was carried from concept to reality a decade ago, the birth of a WIPL should not be too far away if the BCCI has the willpower.