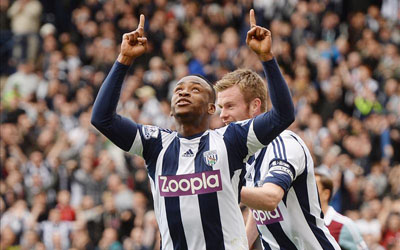 Intuit QuickBooks is a multi-billion pound global leader in small business accounting software and the company’s logo will feature on the Club’s home and away shirts during the 2014/15 Barclays Premier League campaign.

“The fact we have been able to join forces with such an established global brand underlines the strides the Club has been making in recent years. We are looking forward to forming a strong working relationship with Intuit QuickBooks.”

“As one of the founding members of the Football League, Albion has a long and impressive history as a well-supported, family-focussed club with incredibly passionate fans.

“The Club is about to begin its fifth successive season in the Premier League and we can’t wait to get behind the Baggies. We are excited about making this deal a success on and off the field.”

“As the world’s No.1 online solution for small business accountancy software, QuickBooks is proud to support the businesses and sporting passions of entrepreneurs in West Bromwich, the West Midlands and the entire UK.”