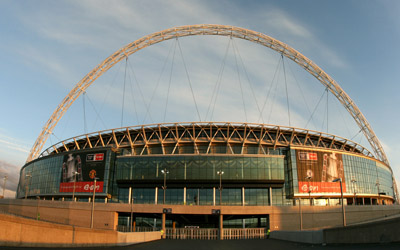 European Soccer’s governing body UEFA has selected London’s Wembley Stadium as the host for the EURO 2020 Final and Semi-Finals.

Wembley beat off competition from Germany’s Munich, who received hosting rights to a quarter final and three group games.

FA Chairman Greg Dyke was feeling positive after the announcement: “On behalf of everyone at The FA and our President HRH The Duke of Cambridge, I am delighted Wembley Stadium and London have been awarded the right to stage the semi-finals and Final of UEFA EURO 2020.

“It will be a great honour to be part of what will surely be a superb celebration of 60 years of the UEFA European Championship.

“My thanks go to all our partners in the bid – particularly the Government, Greater London Authority and the Mayor of London – and of course to UEFA President Michel Platini and the UEFA Executive Committee. I also congratulate all of the other successful bidding nations.”

UEFA General Secretary Gianni Infantino said a number of reflections had led to the Executive Committee’s decision in Lausanne in December 2012. “Let me say it is a decision only about 2020,” he emphasised. “2020 is the 60th anniversary of the European Football Championship. Obviously the fact that the EURO will feature 24 teams instead of 16 puts an additional burden on countries hosting such an event. It becomes much more difficult for many countries – the requirements are becoming bigger and bigger.

“An opportunity like this, to give many cities and many countries the possibility to host even just one part of a EURO, is certainly an excellent thing, especially in times when you have an economic situation where you cannot expect countries to invest in the facilities such an event requires. Certainly one of the purposes of this decision is to help countries who are perhaps not sure today whether they should build a national stadium – giving them the impetus to build such a stadium. Instead of having a party in one country, we will have a party all over Europe in 2020.”