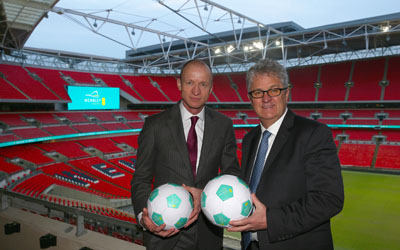 Wembley National Stadium Ltd. (WNSL) have announced today that digital communications company EE has come on board as the stadium’s first lead partner.

The long-term six-year partnership is effective immediately with the deal showcased at the first event at the stadium, the Capital One Cup Final on March 2. The deal will not include changing the name of the stadium which was rumoured as a possibility in the past.

Wembley will benefit from multi-million pound investment in its technological infrastructure over the course of the six-year partnership to offer visitors the best possible ‘sofa to seat’ experience.

As part of a planned ‘technology road map’ to be delivered during the six-year deal, future technological advancements from EE include mobile ticketing solutions, enhanced mobile network access and super-fast Wi-Fi available for all.  EE customers will benefit from exclusive ticketing and marketing initiatives from late March.

The deal also includes the launch of a free app – the first bespoke app designed for Wembley visitors.  The new app offers fans a dynamic feed of event content as well as stadium and travel information and is available to download on Apple and Android devices from today.

Melvin Benn, Wembley Chairman, said: “We have been looking for the right partner to help us make sure that Wembley maintains its reputation for being one of the best sport and entertainment venues on the planet. As stadia around the world become increasingly more technologically advanced, EE is the perfect partner to assist us in fulfilling that goal, giving event owners and their fans the best possible and unforgettable shared experiences.

Olaf Swantee, CEO at EE, said: “At EE, we are always looking for new ways to enhance digital lives across the UK and this ground-breaking deal allows us to extend the same vision and passion to the country’s national stadium. Over the coming months, we will announce an exciting programme of upgrades and innovations to the existing infrastructure at Wembley that will ensure the stadium offers visitors a world class spectator experience for many years to come.”

He told iSportconnect: “Wembley Stadium has such a place in the nation’s pyche that any naming rights deal had to be sensitively managed.

“Without the ability to link shirt sponsorship to stadium naming rights (as happened at Arsenal and Manchester City) the Wembley Stadium deal was always going to be less valuable, but The FA appears to have worked out how to finance the introduction of wifi connectivity into the stadium.

“Whether the deal is a good one for The FA will depend upon the absolute value received which, in the absence of any reported cash involved in the deal, is difficult to assess.”