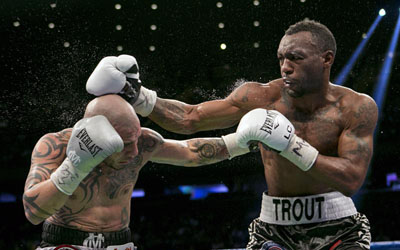 The 27-year-old American, whose last victory was against four-time boxing champion Miguel Cotto , currently holds a 26-0 record with 14 knockouts.

“We are excited and honored to welcome such an elite boxer to Team USANA,” said USANA Chief Communication Officer Dan Macuga. “We rigorously test our supplements to make sure that the products we offer are of the highest and purest grade possible. To have top-tier athletes like Trout trust their health and careers to USANA affirms our position as an industry leader.”

Raised in Las Cruces, New Mexico, the southpaw champion first stepped into the ring at the age of 10 and has never looked back. In 2004, he was named an alternative at the Athens Summer Games. He made his professional debut a year later with a KO in the third round against Justo Almazan . Trout has since held multiple titles, including WBC Continental Americas Light Middleweight champion, the WBA Fedelatin Light Middleweight title and WBA Light Middleweight title.

“Defending the light middleweight title, I need to be able to train and perform with everything I have, and with that I need to be able to recover quickly and give my body the nutrition it needs,” Trout said. “USANA’s supplements are high-quality and trustworthy products that I know I can trust to help me stay undefeated.”

Trout will step back in to the ring April 20, at the Alamodome in San Antonio as the main event of a Showtime card to face the undefeated (41-0-1, 30 KOs) and current WBC Jr. Middleweight Champion Canelo Alvarez in a unification fight.