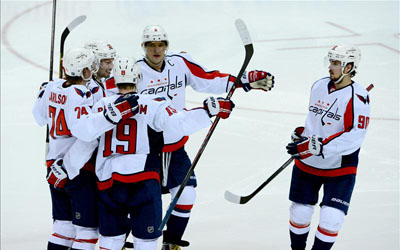 National Hockey League (NHL) franchise Washington Capitals and the Hershey Bears of the American Hockey League (AHL) have extended their affiliation agreement through the 2014-15 season.

The Bears, viagra 40mg one of the AHL’s elite franchises, viagra sale recently completed their ninth season as Washington’s AHL affiliate under the current agreement. Hershey has qualified for the playoffs in eight of the last nine seasons and won the Calder Cup in back-to-back seasons as the champions of the AHL in 2009 and 2010 as well as in 2006. Hershey has reached the Calder Cup final in four of the nine seasons it has been affiliated with Washington under the current agreement.

“We are excited to extend our affiliation with the Hershey Bears, seek ” said Capitals president Dick Patrick. “The Bears are a great franchise and we look forward to working together again to develop our prospects in Hershey.”

“The success of the Hershey Bears as the AHL affiliate of the Washington Capitals has been unmatched for nearly a decade,” Hershey president and general manager Doug Yingst said. “The affiliation makes perfect sense geographically and logistically, and we are excited to work together again to produce two quality teams for our fans.”

The Capitals and Bears were previously affiliated for seven seasons from 1977 to 1984, including the Bears’ 1980 Calder Cup championship.