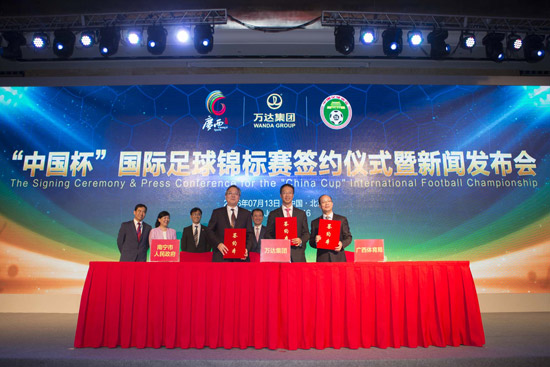 The 2017 games will be held in the southern Chinese region of Guangxi, on January 9 to January 16.

China and the three national teams from Europe and the Americas will play four games, offering fans a glimpse of the highest levels of international soccer.

The China Cup is the first international soccer competition to land in China and is a FIFA-approved international A-level tournament, capable of earning FIFA points for global ranking.

The China Cup will be held annually, initially featuring competitions between four teams and gradually building up to eight teams in the future. In addition to China, other participating nations will be among the world’s top-ranking national A teams.

The first China Cup comes as China’s national team prepares to compete for a spot in the 2018 World Cup in Russia.

Starting from 2018, the China Cup will invite countries from Europe and the Americas whose teams have the highest skill levels, enabling international football stars to play in front of a vast number of Chinese soccer fans on the stage of the China Cup.

Wanda has spent the last two years in more than 100 negotiations, undergoing major work to gain the final approval from the Chinese Football Association, Asian Football Confederation and FIFA to bring “China Cup” into reality.