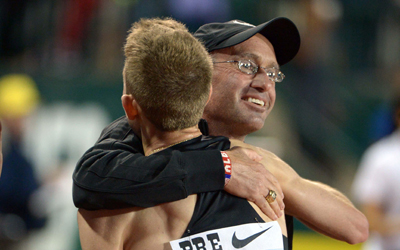 WADA Responds to BBC Allegations of Doping in Athletics

The World Anti-Doping Agency has responded to a BBC investigation which alleged American coach Alberto Salazar was complicit in the doping of Olympic 10,000m silver medallist Galen Rupp.

Salazar, a renowned athletics coach who also looks after double Olympic and world and European track champion Mo Farah, has been accused of violating anti-doping regulations. The investigation claimed that he was involved in doping US 10,000m record-holder Galen Rupp when he was 16 years old.

Salazar and Rupp both strenuously denied the claims. In a statement Salazar said the legal supplement Testoboost had been “incorrectly recorded as ‘testosterone’ medication”, and that “the allegations were based upon false assumptions and half-truths”.

The BBC Panorama programme also included a segment in which journalist Mark Daly took micro-doses of the blood-boosting drug EPO. The doses were enough to improve his performance, yet not enough to trigger a red flag in his biological passport.

WADA released a statement shortly after the programme went to air saying: “We have carefully viewed the BBC’s Panorama programme which includes some allegations suggesting doping in athletics.

“Among these, the programme alleges practices relating to coach Alberto Salazar of the Nike Oregon Project in the United States. Any investigation will be a matter for the United States Anti-Doping Agency (USADA) and the IAAF, and the relevant information shall be passed to them.

“We acknowledge that the programme also raises questions regarding the ability of athletes to dope by taking minimal amounts of performance enhancing substances without testing positive, otherwise known as ‘micro-dosing’.  It is an issue that we are exploring in great detail with
experts from across the anti-doping community, and indeed it was highlighted in the recent Cycling Independent Reform Commission (CIRC) Report.

“Due to short detection periods for EPO and certain other banned substances, we now know that tests need to be carried out before competition and in certain circumstances overnight (from 11:00pm – 06:00am) as is set out in WADA’s revised International Standard for Testing.

“While the programme suggests that the journalist, through his experiment, was able to enhance his performance without recording an adverse analytical finding (AAF), we haven’t been provided any information that would validate this allegation nor is there anything in the programme which would indicate that his profile would have “beaten” the ABP programme.”

Also in the documentary US 10,000m world championship bronze medallist Kara Goucher was interviewed, who trained at Salazar’s Oregon Project until 2013.

She spoke of her concerns about Salazar and about her interaction with Rupp before the 2011 World Championships.

“I had a conversation with Galen in 2011 and he told me how tired he was and how he was so excited to have the season be over,” she said. “And fast forward a month and he shattered the American record. That’s not how it works.”

The allegations stemmed from a number of unnamed insiders.

It is worrying news for world of athletics at a time when they are building up to a decision on who will be the new president of the International Association of Athletics Federations.

Great Britain’s Seb Coe and Ukraine’s Sergey Bubka are the challengers to succeed Lamine Diack when he steps down as president at the IAAF’s August Congress in Beijing.