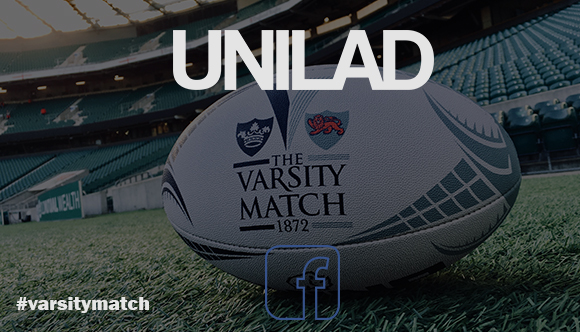 The Varsity Match has announced a new online streaming partnership with UNILAD which will see the 2017 men’s and women’s Varsity Matches streamed live on Facebook.

Fans will be able to watch events on Thursday 7 December live on UNILAD’s Facebook page, which has a following of over 34 million people.

The agreement forms part of a triple viewing offering for fans which sits alongside the ongoing television broadcast on BBC and live stream via the Varsity Match website.

The Varsity Match Company CEO, David Searle, said: “We are delighted to be working with UNILAD in what we hope will be a significant step in reaching and introducing The Varsity Match to new digital audiences.

“The Varsity Matches are an historic showcase of student athletes and one of the biggest amateur global sporting events.

“We are continually looking at new, innovative ways to grow and develop the event, and we look forward to moving the matches further into the modern area, opening-up the occasion to a younger, more social media-focused audience.”

UNILAD CEO, Liam Harrington, said: “We are delighted to be partnering with the Varsity Matches this year. As one of the world’s largest running sporting fixtures, it’s a fantastic opportunity to show our young and global audience a great contest between two of the most prestigious universities in the world.”

Broadcasting is dead – and more alive and dynamic than ever before in the digital world. Television and video content is everywhere, with multiple platforms and devices available at billions of fingertips around the globe.

But staying ahead of the curve has never been more difficult, with business models often running to catch up to ever-changing technology and new opportunities coming online every single day.