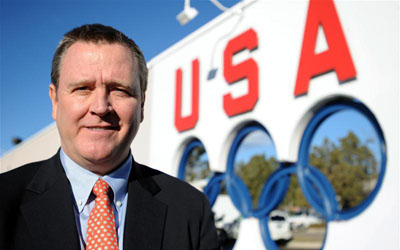 United States Olympic Committee (USOC) chief executive Scott Blackmun has revealed they will look to narrow down the list of potential candidates from ten to two or three to bid for the 2024 Olympics.

Speaking to the Associated Press, Blackmun (pictured) also said they will decide by sometime in 2014 whether they will actually bid for the 2024 Olympics.

The most likely American candidate cities for 2024 seem to be San Francisco, Philadelphia, Boston, Dallas, a potential San Diego/Tijuana joint bid, and Los Angeles, which would be aiming to host its third Olympics since 1932.

Paris, which in 2024 will celebrating a full century since they last hosted the Olympics, is probably America’s stiffest competition for the honor, but Rome, Doha, Dubai, Nairobi, Toronto, Berlin and Durban, South Africa are also considering bidding to host the 2024 Games.

Also USOC chairman Larry Probst said officials will keep a keen eye on the current 2020 Olympics bidding process to see if they can glean anything from the presentations of hosting hopefuls Tokyo, Madrid, and Istanbul.

”As part of our potential preparation for a future bid, it’s a great learning experience,” Probst said.

‘We’re looking forward to learning as much as we can between now and any potential future bid we would initiate.”