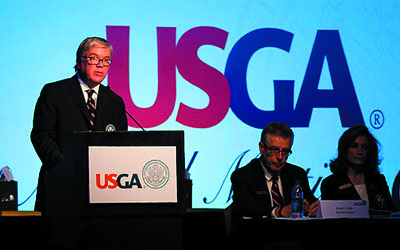 The United States Golf Association (USGA) has appointed Thomas J. O’Toole Jr. as the 63rd president of the organisation  which together with The R&A governs the game worldwide.

The election of officers and the 15-member USGA Executive Committee also took place on Saturday during the USGA’s Annual Meeting in the Village of Pinehurst, N.C.

O’Toole replaces Glen Nager who left at the end of his econfd term concluded on February 8.

As president, O’Toole, 56, assumes the leadership of the more than 300 professional staff and nearly 1,200 volunteers who serve the 119-year-old organization, and succeeds Glen D. Nager, of Washington, D.C., who served for two years as USGA president.

“It is an honor and a privilege to lead such a noble organization,” said O’Toole during remarks made at the USGA Annual Meeting. “I am excited and energized to continue my service to the Association and keenly aware of the magnitude of the profound responsibilities that accompany this role.”

“I wish to congratulate my colleagues on the Executive Committee for all they have achieved, and all they will achieve over the coming year,” O’Toole added. “I look forward to working with them, [USGA Executive Director] Mike Davis and his team, and our allied partners throughout the golf community to build a stronger future for the USGA and for the game.”

Under O’Toole’s leadership, the USGA will continue to focus on the core priorities that have been established in the Association’s strategic plan: to conduct the most exemplary championships in golf, to provide worldwide excellence in governing the game, and to enhance critical services that support the game and those who play it.

“With its second century of service well underway, the USGA is striving to bring out the very best the game has to offer and to open up the game to new players and new cultures in the U.S. and throughout the world,” said O’Toole. “Making the game more accessible and more welcoming is not done merely for the benefit of feeling good, or even just doing the right thing. Opening up golf is good for the game.”

Thomas J. O’Toole Jr. has dedicated more than a quarter century of service to the USGA and the game. He has been associated with the USGA since 1988, serving as a Rules official at more than 150 USGA championships, including every U.S. Open since 1990. Since 2004, he has been a member of the Rules of Golf Committee.

Along with O’Toole, four members of the Executive Committee have been elected to serve as officers. They are: Daniel B. Burton, of Lititz, Pa., and Diana M. Murphy, of St. Simons Island, Ga., as vice presidents; William L. Katz, of Chatham Township, N.J., as secretary; and Mark E. Newell, of McLean, Va., as treasurer.

In addition, Ernest J. Getto, of Santa Barbara, Calif., will serve a second term as general counsel for the USGA.

There are three new members of the Executive Committee for 2014: G. Thomas Hough, of Atlanta, Ga.; Asuka Nakahara, of Merion Station, Pa.; and George J. Still Jr., of Atherton, Calif.