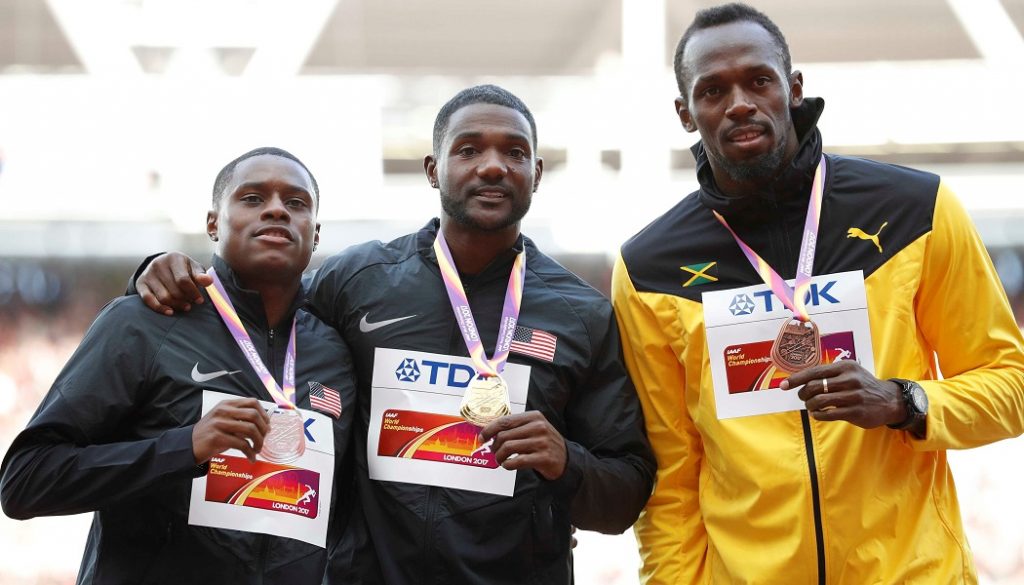 As a David Bowie song once told us, its all about Sound and Vision, but there seemed a strange disconnect between the two and what viewers experienced on screens of all shapes and sizes as they followed the opening weekend of the IAAF World Athletic Championships from the London Olympic Park, seeing and hearing events that seemed incongruous, but which like those wonderful London 2012 Olympic Games, will change world sport, only this time for dramatically different reasons.

The capacity crowd inside the London Olympic Park stadium also seemed unsure about what was happening as the world’s greatest athlete of modern times, Usain Bolt, walked slowly towards third place on the medal podium, and would need to be redirected by one of the volunteers trackside to his customary place to collect a gold medal at the centre of the podium, a position that Bolt had come to own by living and performing at the centre of the sporting universe.

But this time would be different and for the first and last time in his stellar career, Bolt had been defeated in the final of an elite global world athletic championship, and the world could not believe what it was seeing as the bronze medal was placed around Bolt’s neck by IAAF President Sebastian Coe.

The chorus of cheers that greeted Bolt was thunderous and never before had the bronze medal recipient been so loudly and noisily applauded.

And never had the gold medal winner, in this case the American Justin Gatlin, been greeted with such derision by a crowd upon receiving his medal, completing one of the most dramatic weekends and moments in modern sport.

This was an unparalleled and unscripted drama of thwarted ambition and talent every bit as compelling as a Shakesperean tragedy produced in one of London’s famous West End theatres – the second act in a drama that began on the evening before as the ageing athlete and doping cheat Gatlin stole the crown and mantle of world’s fastest man from Bolt, the retiring sprint king and legend.

Gatlin took just under 10 seconds to transform the mood inside the London Olympic stadium from celebration to controversy as the capacity 60,000 strong crowd watched in shock, anger and disbelief as Gatlin and fellow American sprint sensation Christian Coleman relegated Bolt to third place in the 100m final, arguably the pinnacle and single most glittering and prestigious event in world sport.

Gatlin’s win was cloaked in bitter irony as well as controversy. Bolt’s career as the greatest clean athlete of his generation was not supposed to end in defeat like this, and certainly not at the feet of a disgraced sprinter whose doping history had contributed to the current mistrust and malaise of elite sport, and which Bolt himself had warned would kill athletics on the eve of these eagerly awaited IAAF World Championships.

This was not the outcome that the sold out stadium audience had come to witness, hoping instead for a repeat of the magic from the London 2012 Olympic Games when Bolt became the first athlete to defend an Olympic 100m gold medal inside the same stadium.

Instead Gatlin’s surprise victory killed off a fairytale ending to Bolt’s legendary career and has since generated global attention and outrage in athletics and sport more generally.

The unexpected defeat inflicted by Gatlin on Bolt lifted the aura of invincibility that has surrounded the Jamaican since he arrived like a comet blazing a trail across the sporting universe with a procession of once-in-a-lifetime performances that captured the world’s imagination beginning at the Beijing 2008 Olympic Games, earning global respect and admiration along the way.

While many contemporary sporting greats like Roger Federer have lost Grand Slam finals, never before had Bolt been beaten in the final of a global sprinting championship.

The circumstances surrounding Gatlin’s unlikely win as the fastest athlete in the world, in his mid thirties, have raised more questions than answers to the dilemma about the position and future of drug cheats in elite sport.

Usain Bolt is one of the world’s most popular and respected people and athletes on the planet and his shock defeat has opened up a new front in the war on doping, reviving debate about the eligibility of athletes who have doped to compete again.

The Gatlin win has also prompted more calls for lifetime bans on athletes who have doped, despite possible legal difficulties on penalties that could be an unfair restraint of trade for career athletes.

Nor was Gatlin’s win the outcome that world sport’s governing bodies and figures at the IOC, IAAF and WADA had wanted in the fight to restore confidence in sport’s credibility among the public, sports fans, sponsors, broadcasters, viewers and especially young people.

While Gatlin and many other doping offenders have ridden on the coattails of Bolt – the world’s most successful and decorated elite athlete who has never tested positive for a banned substance – the Gatlin win transformed Bolt’s farewell finale from an occasion of celebration to controversy.

This was a bad result for Bolt and an even worse result for athletics in the battle to clean up the image and reputation of the sport with a series of sweeping new reforms introduced by IAAF President Sebastian Coe to contain and curb corruption and doping.

While Bolt has blamed his lacklustre performances at these World Championships on poor starts and problems getting out of the blocks, his surprise defeat has raised more questions about the regulation of athletes who have a history of doping and cheating, especially given the IAAF’s ongoing ban on Russian athletes involved in the state sanction government doping programes.

While some local sports administrators may have quietly questioned the heavy focus on doping and its relevance to sports fans in the lead up to these London World Championships, the loud and constant jeering that has greeted Gatlin’s every performance so far in London sends a loud, clear and unmistakable message to those sports administrators that the public will no longer tolerate cheating in sport. Nor will they tolerate a soft approach to doping and corruption.

The fastest 100m times ever. Those caught doping struck out in red!

Sports fans have actively protested against Gatlin’s win and presence at these championships, a development almost unprecedented in recent times, and instead of leaving uplifted and inspired, many fans poured out of the London Olympic stadium feeling disappointed, dejected and even robbed by Gatlin’s win as they journeyed home from the nearby Stratford tube station.

The anti-Gatlin jeers in the London Olympic stadium following Bolt’s final individual 100m and medal ceremony have sparked protests of support for Bolt who many believed had saved the soul of sport when he defeated Gatlin, a dual doping offender, at the same IAAF world championships in Beijing just two years ago.

Indeed, the chorus of applause that followed Bolt on what resembled a moral as well as career victory lap after the shock race result formed part of a long wave goodbye to the athletic great from Londoners who have embraced Bolt as an adopted son, and could not have been in starker contrast to Gatlin’s almost invisible and muted post-race presence.

The timing of Gatlin’s win is also a set back for the IAAF as it looks to fill the enormous gap that Bolt leaves on the world stage – a gap that Gatlin will struggle to fill as world champion but which might be filled in the years ahead by his teenage countryman and potential heir apparent to Bolt, Coleman, whose performances and demeanour have been impressive.

Like the great Muhammad Ali, however, Bolt’s footsteps may never be filled, not just because of the speed at which he moved but also because Bolt has taken a road less travelled in modern sport.

The heroism, bravery and loneliness of Bolt’s unique and courageous journey to the summit of global sport were perhaps ironically never better highlighted than the circumstances in which he lost his very last race.

Bolt may have lived his public life in sport in sub 10 second time frames, but his legacy of achievements, inspiration and memories will last for generations. Perhaps athletic officials might play David Bowie’s Heroes anthem if Bolt enters the London Olympic stadium for the final time as expected next weekend for the 4x100m sprint relay.

Michael Pirrie is a London based international communications and major events consultant and commentator who advised on the City of London’s successful bid for the 2017 IAAF World Athletic Championships, and worked as Executive Adviser to the Chairman of the London 2012 Olympic Games Committee, Sebastian Coe.  He most recently worked for the Budapest 2024 Olympic Games Bid.

Do you want to contribute to iSportconnect? Click here to get involved!