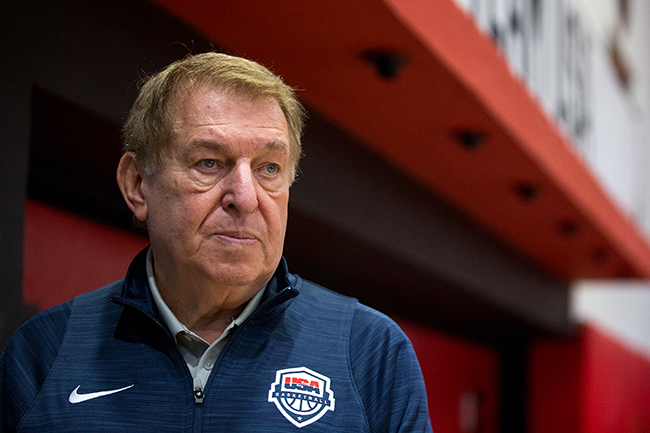 Following the weak performance of the American team at the FIBA World Cup, USA Basketball Managing Director Jerry Colangelo has warned stars that when it comes time to pick next year’s Olympic team he will remember who let the side down by backing out of playing in China.

Of the 35 players originally selected for the U.S. player pool, only four are in China for the World Cup. The U.S. lost to France in the quarterfinals, ending a streak of seven major international tournaments — four Olympics and three World Cups — where the Americans captured a medal, the last five of them being gold.

“I can only say, you can’t help but notice and remember who you thought you were going to war with and who didn’t show up,” Colangelo said yesterday. “I’m a firm believer that you deal with the cards you’re dealt. All we could have done, and we did it, is get the commitments from a lot of players. So, with that kind of a hand you feel reasonably confident that you’re going to be able to put a very good representative team on the court.

“No one would have anticipated the pull-outs that we had.”

The USA lost again to Serbia yesterday and will finish no better than seventh — the worst finish ever by an American men’s team in a major tournament. The previous worst was sixth at the 2002 World Championship, and the U.S. coaches with this World Cup team insist that in terms of return on effort invested this group deserved better.

Many players cited schedule concerns as a reason to not play this summer, while others are dealing with injuries and some are acclimating in advance of joining new teams when training camps start in less than three weeks. The new international schedule is a challenge as well, with the World Cup and the Olympics in consecutive off-seasons for the first time since 1967 and 1968.

More than 50 players were part of the U.S. World Cup plan at one point or another. Of those, 12 went to China, two got cut after the first week of training camp — and the other three dozen or so dropped out on their own.

“We just have to get our act together for the Olympics,” said Colangelo, a former NBC coach and team owner.

The U.S. will go to Tokyo seeking a fourth consecutive gold medal and getting stars to play on the Olympic team is rarely a problem. The World Cup team wasn’t exactly loaded with superstars — only two of the 12 U.S. players on the World Cup roster were All-Stars this past season (Kemba Walker, Khris Middleton), while nine of the 12 players on the 2016 Olympic team were coming off All-Star appearances.

“The players did everything they can do,” Colangelo said. “They are a good group of guys. But we went in with higher expectations in terms of roster, and it didn’t kind of happen the way we were hopeful and anticipating and expecting. That, to me, was a big disappointment.”

Colangelo also expressed disappointment for U.S. Coach Gregg Popovich, who will also lead the Tokyo-bound team next summer. Popovich missed out on making the 1972 Olympic team as a player and was an assistant coach on the 2002 World Championship and 2004 Olympic teams that failed to win gold medals.

“I told Pop I felt really bad for him because I wanted him to have a chance to win a gold medal after his experience with USA Basketball in the past,” Colangelo said. “But it wasn’t meant to be in this competition.”

So now, his eyes are turning to Tokyo.

It won’t take long for the recruiting process to start, either.

“Going forward for USA Basketball, we’re going to need the cooperation of teams, agents and then there has to be communication with players 1-on-1 to solidify those commitments,” Colangelo said. “I am going to be anxious to see how many players reach out early to indicate that they wish and want and desire to play.

“But I’ll make this statement: It’s as much about maybe who we don’t want as much as who we want.”