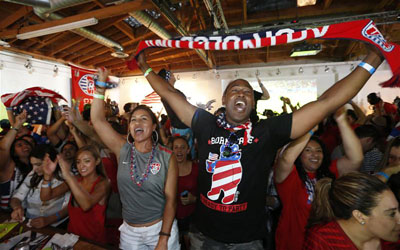 Despite missing out in qualifying for the Last 16 of the World Cup with a 2-2 draw with Portugal, the United States still saw the largest ever audience for a soccer match in the U.S.

The Nielsen company said that Sunday’s gripping game was seen by an average of 24.7 million viewers on ESPN and Univision.

That matches it with the 24.7 million US viewers who watched the 2010 World Cup final between Spain and the Netherlands.

ESPN said an additional 490,000 people streamed coverage of the game on their mobile devices through the company’s app.

Streaming numbers for 2010 weren’t immediately available, but it’s very unlikely they were that high because streaming apps were not as sophisticated then.

Many factors were in place to make it so popular: it was an exciting game, interest in the US team was high because of the first-game victory against Ghana and World Cup viewing in general has been high.

The Sunday evening time slot also meant many Americans were available to watch.

“It indicates that a large group in our audience is really following the story of the World Cup, which is really terrific,” said Scott Guglielmino, ESPN senior vice president of programming.