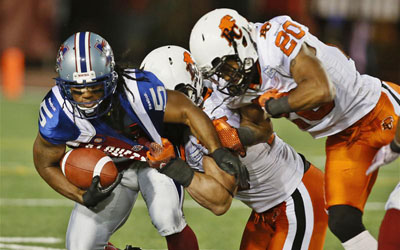 Already Canada’s leader in hockey trading cards through its exclusive agreement with the National Hockey League (NHL) and NHL Players Association (NHLPA), Upper Deck intends to deliver the same high quality craftsmanship, innovation and authenticity to CFL fans and collectors across Canada, starting with the first-ever 180-card CFL base set.

“Upper Deck’s position as the leader in sports cards and collectibles in Canada will undoubtedly be bolstered by the unveiling of our new CFL line of trading cards,” said Jason Masherah, president of Upper Deck. “We are thrilled to announce this new partnership with the CFL and the CFL Players’ Association, and we hope that the league’s passionate fans will enjoy our inaugural product this fall.”

The first premium line of Upper Deck CFL cards will be printed in Canada and is scheduled to arrive in stores across Canada onSeptember 24. The first Upper Deck CFL Football product will contain six cards per pack and 24 packs per box. defense/Special Teams SP cards, and 8 O-Pee-Chee Retro cards.

The CFL’s first-ever official trading card set is bound to become a collector’s prize for years to come.