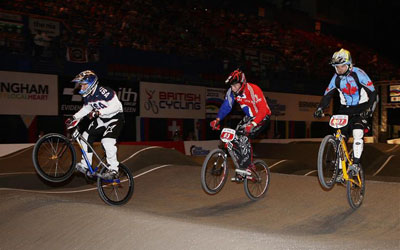 UCI BMX World Championships to Return to United States in 2017

The International Cycling Union (UCI) has named Rock Hill, South Carolina as the host of the 2017 UCI BMX World Championships, the first time in 16 years the event has been staged in the United States.

The 2017 event at the Novant Health BMX Supercross Track.

The UCI BMX World Championship has not been held on American soil since 2001, when Louisville, Ky., played host. Three-thousand amateur and 300 pro racers are expected to compete in the world championship, which will be held July 26-30, 2017, with practice days on July 24-25.

“The return of the UCI BMX World Championships to the United States in 2017 will mark the first time these championships have been held on American home soil since BMX was added to the Olympic Games,” said USA Cycling President and CEO Steve Johnson. “The Rock Hill facility is home to one of the world’s finest BMX tracks; and the local organizing committee staff and community leaders have worked tirelessly to secure this bid and we congratulate them on the success of their efforts.”

A bid launched by the city of Rock Hill about three months ago culminated in the awarding of the world championship by the UCI.

Rock Hill’s BMX Supercross track is expected to open in August and already has several events scheduled for late 2014.