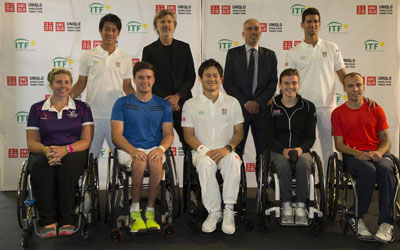 The International Tennis Federation (ITF) has signed a partnership with UNIQLO with the Japanese retail company becoming a sponsor of ITF’s major wheelchair tennis properties in a three-year deal.

Commenting on today’s announcement, ailment ITF President Francesco Ricci Bitti, said: “It is great news for wheelchair tennis that a high profile global brand like UNIQLO has become the title sponsor of the Wheelchair Tennis Tour. We have been impressed with UNIQLO’s enthusiasm, creativity and vision, and we believe that they will be an outstanding partner for both the ITF and wheelchair tennis, one of the fastest growing Paralympic sports. We welcome their involvement and look forward to working with UNIQLO over the next three years.”

Fast Retailing Chairman, President & CEO Tadashi Yanai said: “We are extremely pleased to have partnered with the International Tennis Federation as the title sponsor of the Wheelchair Tennis Tour. Shingo Kunieda, Japan’s two-time Paralympic champion and wheelchair world No. 1, six-time Grand Slam champion Novak Djokovic and Japanese No. 1 Kei Nishikori are already UNIQLO Global Brand Ambassadors, and we wish to use the sponsorship of the Wheelchair Tennis Tour to help increase the popularity of the sport worldwide.”

The UNIQLO Wheelchair Tennis Tour comprises over 160 tournaments in more than 40 countries, including wheelchair tennis events at all four Grand Slam tournaments.