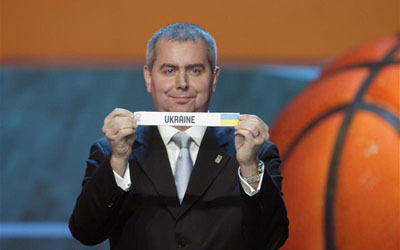 FIBA Europe have confirmed today that Ukraine will no longer host the 2015 European Men’s Basketball Championship.

In a stement they said: “The decision was taken after a careful consideration of the continuous political situation and security issues in Ukraine, which deemed as less than favourable for the staging of such an important and demanding event.”

“The Board took note of the efforts made by the Ukrainian Federation and the country’s giant strides in recent years, including a 6thplace finish at EuroBasket 2013 and their participation in the 2014 FIBA Basketball World Cup.

“In that regard the Board declared its willingness to help the Ukraine Federation in its efforts to promote basketball and decided to authorize the President of FIBA Europe Turgay Demirel and the Secretary General Kamil Novak to start negotiations immediately with the Ukrainian side on the possibility of the country hosting EuroBasket 2017 and provided that some necessary conditions are met.”

The organisation will now search for a new location for EuroBasket 2015 and are inviting bids from all European Federations inviting single or multi-country bids.

All interested parties will have to present the required official documentation and guarantees by 31st July, 2014.