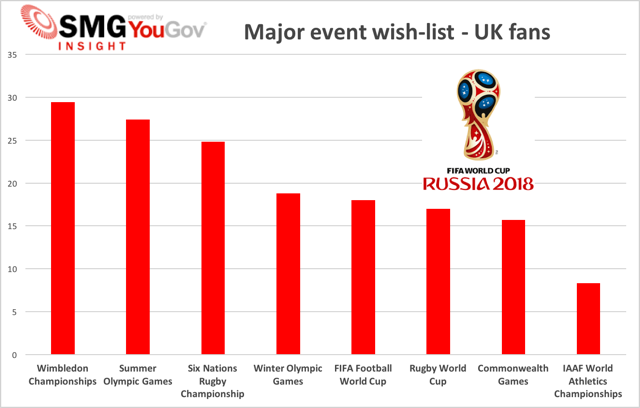 New research has revealed that British sports fans would prefer to purchase tickets to a host of other major sports events, home and abroad, rather than the Football World Cup 2018 in Russia.

Data collected by sports and entertainment research company SMG Insight shows that Brits rank Wimbledon, the Six Nations and both the Winter and Summer Olympics as events they would most like to attend if money and geography were no object.

The Football World Cup ranks above the World Athletics Championships and the Commonwealth Games for fans, with the Rugby World Cup 2019 already level-pegging with football’s blue riband event on fans’ wish-lists.

Bruce Cook, SMG Director, says that several factors may be putting sports fans off the World Cup: “There’s a feeling that Russia next year may well not be the most hospitable place for England fans. The violent clashes during the Euros involving Russian fans has no doubt had an impact on fans’ views.

“On top of that, England’s performances at major tournaments will have pushed Russia 2018 down the list of many fans. There’s no doubt that England will be well-supported in Russia but for many casual sports fans, England’s showing at recent tournaments has been enough to push the World Cup down our wish-list league.”