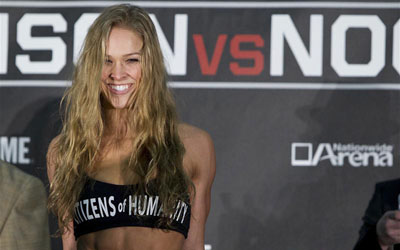 Rousey was the first female fighter to join the UFC, becoming its first champion in the bantamweight category. As a judoka, she has won every fight in the first round by armbar, a fighting technique, and last year gained infamy when she broke an opponent’s arm.

Rousey became the first American woman to win an Olympic medal in Judo, capturing bronze at the Summer Games in Beijing.

On Feb. 23, Rousey, who is undefeated, defended her belt and won the UFC’s first women’s bout, beating Liz Carmouche in the first round of their bantamweight title fight at UFC 157.

Founded as the William Morris Agency in 1898, WME represents artists from all facets of the entertainment industry, including motion pictures, television, music, theatre, digital, publishing, lifestyle, and physical production.

WME Co-CEO Ari Emanuel was crucial in brokering the $700 million deal between the UFC and FOX. Emanuel is the basis for the character Ari Gold in HBO’s Entourage.