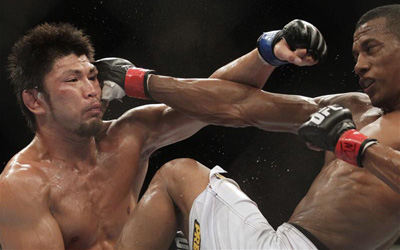 As part of the deal, the broadcast channel will become the home to all UFC events and collateral UFC programming in 2015 and 2016, including UFC Countdown.

KOMBAT SPORT HD will broadcast across France, Belgium, Switzerland, Luxembourg and Sub-Saharan Africa. This is the the first time UFC programming will be shown in Sub-Saharan Africa which exemplifies the exceptional growth of the sport and brand across Europe, Middle East and Africa (EMEA). The new agreement will see a further 7 million households view content from the world’s fastest growing sports organisation.

In addition, this year KOMBAT SPORT HD will also show UFC Fight Night Sydney: Rockhold vs Bisping on November 8th and the live finale to historic new season of The Ultimate Fighter: A Champion Will Be Crowned live from Las Vegas December 12th.

Garry Cook, UFC Chief Global Officer, said “KOMBAT SPORT HD share the UFC’s drive and determination to build the UFC across Europe and Africa. We are thrilled to be working alongside this dedicated sports channel to bring UFC programming to more households than ever before and thus continuing to grow the UFC brand in EMEA.

“The UFC have held exceptional events in Europe and the Middle East this year, including Stockholm, London, Dublin and Berlin, and with the help from our broadcast partners, there will certainly be more to come in 2015.”

Bruno Oppenheim, Editorial Manager at KOMBAT SPORT HD, added: “We are delighted and excited to start a close partnership with the UFC. We will be showing over 100 hours a year of UFC programming and our viewers will be able to follow live events, regular shows and archives of the best events in UFC history.”