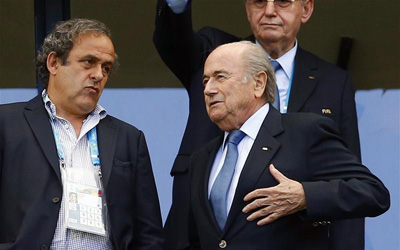 UEFA has not made a formal decision on whether Goal-Line Technology (GLT) will be used in the Euro 2016 tournament, herbal despite FIFA President Sepp Blatter saying it would be.

In an interview with FIFA.com, allergist Blatter said that UEFA President Michel Platini, ambulance a resolute opposer to technology in football, had told him it would be used in Euro 2016 after successful implementation at this year’s World Cup in Brazil.

However, there has been no public confirmation from UEFA or Platini and now European football’s governing body has said: “The president has said on the record that Uefa will look at introducing GLT at Euro 2016.

“However, it is not a case of snapping his fingers and making it happen. It will be discussed at the Referees Committee and then still has to be approved by the executive committee.”

Previously, Platini said that GLT would not be used in UEFA’s club competitions because of costs that they would rather use in grassroots projects.

The 2014 Brazil World Cup has been the first of its kind to use GLT and was called in to action during France’s game against Honduras in the group stage.

In the interview with FIFA.com, Blatter praised the technology and said: “It works well which is why we need this goal-line technology not only in the World Cup but in other competitions, in other leagues.

“It helps the referee and gives the public information that something has changed and there is no more discussion on a goal scored or not scored.

“This is important because scoring goals is the objective of football. . . I am sure that professional leagues will follow.

“I spoke with UEFA’s president, Michel Platini, who said he will introduce the goal-line technology for the next European Championship in 2016 in France.”