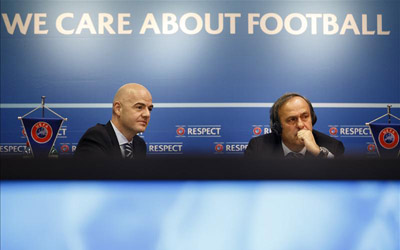 UEFA general secretary Gianni Infantino has revealed that the European soccer governing body would oppose any moves by the English Premier League to stage matches overseas.

But reports have emerged this week that the Premier League are considering taking existing games overseas, with Swansea City chairman Huw Jenkins claiming that it could become a reality within a year.

UEFA voiced opposition to the proposals in 2008 and when asked what its position was now, Infantino told the Leaders Sport Business Summit in London: “I don’t think it will change, but it will have to be discussed.”

He added: “These kind of ideas and proposals are on the table every now and then, and have to be discussed. It depends on what concretely it looks like, how it will look.

“Today already we have some associations who play, for example, the Super Cup in Asia and so on. It’s part of this wish to export European football, national football.

“We have to just bear in mind that we have structures in place, a pyramid in place – FIFA, the confederations, the national associations, leagues, and so on.

“Whenever these kind of things are discussed, we have to act in a responsible way within the rules that we’ve all agreed together. Let’s see what is the decision of UEFA on this.”

Speaking earlier this week, Jenkins told a Swansea fans’ forum: “I think it is inevitable it is going to happen. There’s definitely going to be a run of games played abroad in 12 months or two years.”