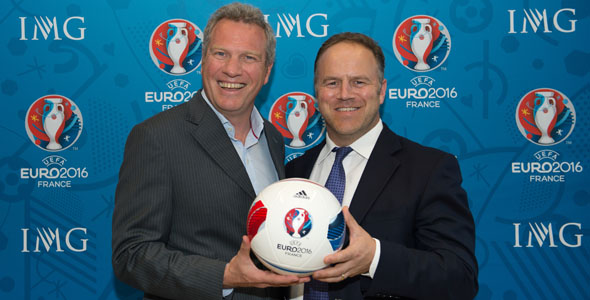 The global rights deal, which was announced by UEFA and IMG Licensing Global Managing Director, Bruno Maglione, includes all of the above mentioned National Team events until 2017, with a primary focus on UEFA EURO 2016 in France.

“The official licensing programme is an important part of the event promotion allowing fans of all ages, in France as well as around the world, to connect with the competition. We look forward to working with IMG and using their expertise to together create a great range of UEFA EURO 2016 official licensed products.”

Simon Gresswell, Vice President, IMG Licensing Europe, said: “We are honoured to be working with UEFA. Our aim will be to create a lasting relationship between the competition and its fans, maximising the role that Official Licensed Products can play in the overall commercial programme. UEFA EURO 2016 will be the biggest ever UEFA European Championships to date and we are confident that the licensing activity will match the event’s huge and growing popularity.”

Mickael Andréo, Senior Licensing Director at IMG Licensing France and Commercial Director for IMG’s UEFA team, added: “We are thrilled to collaborate with UEFA on this major sporting event. The combination of France as the world’s premiere travel destination and the outstanding impact of the Euro 2016 competition, presents a unique opportunity that we look forward to help presenting through an ambitious national and international licensing programme.”