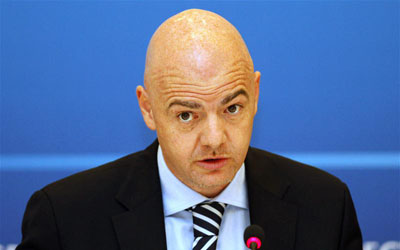 UEFA want Manchester City and Paris Saint-Germain to prove they have not cheated financial fair play (FFP) by securing huge sponsorship deals with companies closely associated to their owners.

City’s £400m deal with Etihad and PSG’s £125m a year deal with the Qatar Tourist Authority have come under scrutiny, as the owners of the two clubs have close links with the companies mentioned.

UEFA general secretary Gianni Infantino said: “Everyone, including PSG, know they have to demonstrate [the deals] are without cheating and that will be submitted to panels.

“We have a regulation which speaks about fair value of deals and the fact that a related party cannot just inject money into a club directly or indirectly.”

In their recently released annual benchmark report, UEFA have highlighted that 46 clubs across Europe could struggle to break even, based on 2009-2011 figures.

The UEFA report showed that 14 clubs participating in this year’s Champions League and Europe League “had reported cumulative break-even deficits in excess of €45m and a further 32 clubs reporting deficits of between €5m and €45m.”

UEFA believe “if these figures are sustained in future monitoring periods, 18 countries will have all of their participating clubs exempt from the break-even assessment and a further 13 countries would have all their assessed club within the acceptable deviation.”

Infantino added: “It has been perceived by some as a sort of anti-English thing – absolutely not. It is just a good common sense rule that everyone of us is implementing at home; if you earn £1,000 you can’t spend £1,200.

“We can only encourage the Premier League as we encourage each league and association. I think it’s very positive.

“We are very happy that the Football League has already introduced financial fair play.”