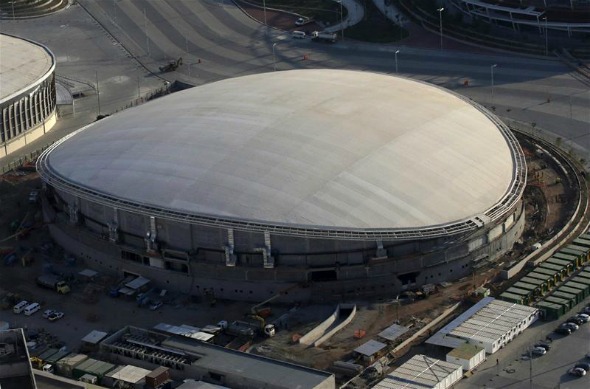 As the Olympics in Rio draw closer; now under 100 days away, Brian Cookson will be hoping cycling can enjoy a controversy-free Games.

The velodrome was perhaps the most memorable venue at the 2012 Olympics in London, which saw an electric atmosphere, helped by British success – but the Rio velodrome is still yet to be finished.

‘We have some concerns’ admits Cookson. Currently, the venue is only 85% complete, with the track still not finished.

Despite those concerns though, the UCI President is hopeful things will go to plan.

He said: “We are very confident that the reassurances from the Rio people will be delivered and we are helping them every way we can.”

But the biggest concern will be that 2016 can be a ‘clean’ year for cycling. Mechanical doping – bikes with inbuilt motors, has become an extra headache for Cookson in his bid to try to keep the sport honest.

Cookson’s resolution to show the sport is fair is clear as you speak to him. The affable Lancashire man’s eyes steel as he spells out the UCI’s position.

“No rider, no team, no nationality is protected. We will catch them and we will prosecute them. There will never be an end to this issue. There will always be people that try to cheat in any walk of life, be it doping or any other sort of cheating.”

Cookson wouldn’t name names, but was quick to call on other sports to join the UCI in admitting their sport had a doping problem and look to deal it.

With Russia’s participation in the Olympics still in doubt, after widespread doping breaches were found last year, Cookson’s message was clear – take the issue seriously.

“All nations, all individuals all sports, should be treating this problem with the seriousness it deserves… And make sure clean athletes can continue in any and every sport and still win.”

“It is our responsibility as the people who run the sport, to make sure families can bring their children to the sport and know they can go all the way to the top if they have the ability and dedication… Without having to lie, without having to cheat, without having to take things that may damage their long-term health, and without having to spend the rest of their lives looking over their shoulder. If we can’t do that, as the governors of sport, we have failed. And we cannot fail. We won’t fail in our sport and I’m sure other people running their sports equally don’t want to fail.”

Cookson has other challenges away from keeping the sport clean too. The UCI and ASO, organizers of cycling’s flagship race The Tour de France, are at an impasse about reforms due to come in in 2017, which would help teams be more economically viable. ASO has responded by pulling the Tour, and all of its other races, off the WorldTour series.

Cookson admits this is a challenge.

“We’re trying to develop and spread our sport around the world, we’re having some difficulties with men’s road racing, in terms of trying to move things on, and develop and reform the sport. ASO are in a little bit of disagreement with us, but I am absolutely confident we can find a solution there. We are working very hard to find a way forward and I’m confident we can do that.”

But Cookson remains convinced that cycling’s future is bright, mainly due to how it resonates with governments.

“It’s not just an elite sport, it’s a pastime, it’s a way of keeping healthy, It’s good for transport, it’s good for the environment, it’s something that really appeals to everybody, of all age groups. It’s good for governments… Cycling can help tick all of those boxes.”