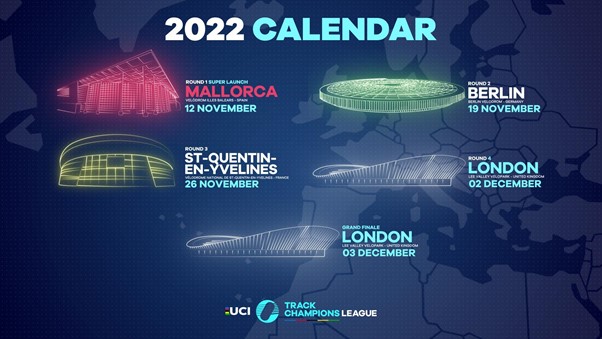 Cycling fans in France and Germany are set to experience the high adrenalin racing of the UCI Track Champions League for the first time, as two new world class venues join the series as part of a reworked calendar for 2022.

Velodrom Berlin and the Vélodrome National de Saint-Quentin-en-Yvelines (SQY) just outside Paris will host rounds two and three respectively, as part of the five-round season kicking off in Mallorca on November 12th. Just as in 2021, London will again host the double-header grand finale on December 2nd and 3rd. These two new velodromes are held in the highest regard having both welcomed UCI World Championships for track cycling in the past and the SQY Velodrome in Paris has been selected to host the Paris 2024 Olympic and Paralympic Games.

The UCI Track Champions League will continue its unique format, bringing unpredictable, short format racing and technological fan experience to thousands trackside and millions of TV viewers around the world.

François Ribeiro, Head of Discovery Sports Events, promoter of the UCI Track Champions League said: “Building on the success of the inaugural season, it was a priority of ours to engage key audiences in France and Germany. Following the postponement of the Paris round last year, we are delighted to finally be able to bring the excitement of the UCI Track Champions League to the French National Velodrome along with the Velodrom Berlin.

“This is the most intense schedule yet with back-to-back racing restoring the excitement the league was set up to harness. Concluding in the world-famous Lee Valley Park to an audience of dedicated fans, the grand finale is set to be spectacular!”

David Lappartient, President of the Union Cycliste Internationale (UCI) said: “Last year, the UCI Track Champions League provided a spectacular show that put the Olympic discipline of track cycling and its athletes in the spotlight they deserve. The fast-paced, short-format racing proved popular with the fans and the riders, who will be delighted to compete at two prestigious new venues in 2022. With five rounds over four consecutive weekends, there will be little time to draw breath as the best track specialists in the world chase one of the four overall titles at stake in this second edition of the UCI Track Champions League.”

The Race Schedule
Round 1 – Super Launch – November 12 – Palma, Mallorca, Spain
Velòdrom Illes Balears
The 6000 capacity multisport venue opened in 2007 and hosted the 2007 UCI Track Cycling World Championships. It also hosted the very first round of the UCI Track Champions League in 2021 where it made its international debut to a packed velodrome in front of hundreds of new track cycling fans.

Round 2 – November 19 – Berlin, Germany
Velodrom Berlin
The Velodrom Berlin venue has a capacity to hold up to 6000 fans for track cycling events, it was completed in 1997 and originally conceived as part of Berlin’s bid to host the Olympics.  From the outside, the spectacular, wood-panelled exterior makes it one of the most unique roof structures in Europe. It was at this velodrome, during the 2020 World Championships, where Discovery and the UCI signed an eight-year partnership to organise the UCI Track Champions League.

Round 3 – November 26 – Paris, France
Vélodrome National de Saint-Quentin-en-Yvelines
This flagship of the French Cycling Federation – The French National Velodrome can hold up to 5000 spectators and opened in 2014. It hosted the UCI Track Cycling World Championships in 2015 and UEC Track Cycling European Championships in 2016. The velodrome will host the track cycling at the 2024 Paris Olympic Games.

Round 4 & 5 – Grand Finale – December 2-3 – London, U.K.
Lee Valley VeloPark
The award-winning Lee Valley VeloPark has a capacity for 6,000 spectators and was constructed for the 2012 London Olympics. The venue also hosted the UCI Track Cycling World Championships in 2016, Sir Bradley Wiggins’ successful attempt on the UCI Hour Record timed by Tissot  in 2015 and more recently, the back-to-back, sold-out rounds of the UCI Track Champions League in 2021. It will again host the UCI Track Champions League Grand Finale where the champions will be crowned at the end of the 2022 series.